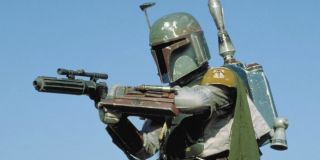 "Originally Boba Fett was set up in Empire as a character, and the third movie’s plot was going to be more about Boba Fett rescuing Han Solo and all of that. Boba was gonna be the main villain… That was set up, why he was taking Han Solo away, why there was a thing with him in the Christmas special".

"When George decided not to make a third trilogy, he completely jettisoned that story line, which is why in the first ten minutes, Boba Fett gets bumped into and falls into the mouth of a giant monster", Miller continued. "So he took what was planned for the third trilogy, which was the confrontation between Luke and Darth Vader, and the battle with the Emperor, and that got squished down from three movies to one movie. And that became the plot of Jedi". Ah, what might have been...

A few months ago it emerged that Lucasfilm were discussing a possible Boba Fett anthology movie, so with any luck death via Sarlaac pit won't be the last time we see the character on the big screen.