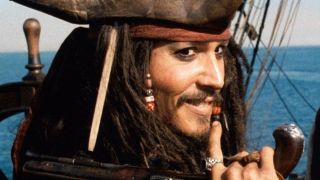 Don't it just warm your cold, dead heart to see celebrities going out of their way to make people happy? Well that's exactly what Johnny Depp did this week for Disneyland guests who took a trip on the famous Pirates of the Caribbean ride.

JOHNNY DEPP WAS ON PIRATES OF THE CARIBBEAN WHILE I WAS ON IT AND IM SCREAMING pic.twitter.com/OsVRL8pmn7April 27, 2017

No doubt Depp's appearance was to help promote the upcoming Pirates of the Caribbean: Dead Men Tell No Tales, but even so, it looks like everyone is having fun, and that's what counts.