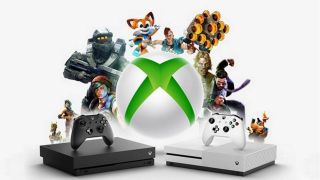 In other words, if you're in the US of A, you can head to a Microsoft Store right now and walk out with a brand-spankin' new Xbox One X (which would normally cost $499.99 plus tax) for literally no upfront costs. Just pay $34.99 per month for 24 months and you get the whole kit-n-kaboodle. Or, opt for the less powerful Xbox One S and pay $21.99 per month for 24 months.

Considering all that you get, it's really a fantastic deal. Xbox Live Gold means you get to play with your friends and you'll automatically have access to 24 months' worth of Games With Gold, while Xbox Game Pass gives you instant access to more than 100 games, including some quality hits like Hitman (2016), Fallout 4, and starting September 1, Halo: The Master Chief Collection. All for roughly half the cost (or less) of a new game per month. Once the financing plan is complete, whichever Xbox you signed up for is yours to keep.

In a news post announcing the program, Microsoft notes that this is a limited-time promotion and supplies are limited, so if sounds like something you want and can afford (and qualify for), I'd suggest heading to your nearest Microsoft Store ASAP.

Maybe you just want to buy the console? Here are the best Xbox One X bundle deals right now.