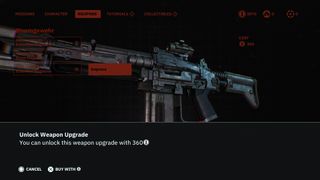 Like most video game currencies, Wolfenstein: Youngblood's Silver Coins are quite scarce and throughout the game the developers have ensured that you can’t just put all of your eggs into one basket, which is why you need to know which Wolfenstein: Youngblood weapon upgrades to spend your hard-earned cash on. There are a few interesting systems at play here, so listen on as we dive into the modifiers and set bonuses, and pick out our favourites for maximum mayhem when you’re filling nasty Nazis full of holes.

How do weapon mods work in Wolfenstein: Youngblood?

In Wolfenstein: Youngblood you unlock weapon mods with Silver Coins, which you can pick up from dead bodies or find in the world as part of crates or laying loose in the environment. To find the weapon mods screen hit the touchpad on the PS4 / the options button on the Xbox One / + on Nintendo Switch / Esc on PC.

This will take you to a menu, navigate to weapons to see a list of the current available weapons, where you can pick out your favourite and you’ll see the gun separated by parts like the stock, receiver and magazine. Click on the corresponding part and you should see three different mods for each, and in the bottom right you should find how they modify the statistics of the chosen weapon.

To unlock a weapon mod pay the fee in silver coins to apply it, and you’re done! Note the brand of the weapon mod too, which we’ll get onto in the next section.

What do Set Bonuses do in Wolfenstein: Youngblood?

Every weapon mod in Wolfenstein Youngblood is branded into three different categories, Nadel, Tempo and Stier. If you apply three upgrades within a specific brand you will achieve that brand’s set bonus.

Given that there are five parts to each weapon, you can only get one set bonus per gun, but you can modify the other parts that aren’t within the specific brand to curate your weapon to your taste!

How does the Mastery System work in Wolfenstein Youngblood?

This is fairly simple, to master a weapon, you have to kill more enemies with it. Eventually you’ll progress through the mastery tree which will add a percentage of damage with the chosen weapon up to level 20. This means it’s well worth focusing on taking out Nazis with your favourite gun so it can get better. For example, I use the Sturmgewehr, which with mastery level 6 receives 24% bonus damage.

How do you improve weapon mods in Wolfenstein Youngblood?

Improving a weapon mod is simple and provides a solid statistical boost to the gun, so they’re worth investing in. However, you also have to unlock them, and some are gated at Level 25, but your mileage may vary. Just make sure you’ve got the silver coins to capitalise when the time comes so you can up your arsenal.

Sturmgewehr - Nadel Semi-Auto Receiver
This turns the repeating rifle into a penetrating, semi automatic beast that can take out enemies through walls, cover and other Nazis that stand in your way. Tied with the x-ray scope it is absolutely deadly in the early game for picking off troops from afar, but by the time things start to level out in the late game you’re going to want to switch to a full Stier build for efficiency.

Pistole - Tempo Auto Receiver
A powerful modification that turns the humble Pistole into a rapid-fire beast, this mod fixes the fire rate problem that Pistole users suffer and can even be silenced in this mode for high damage and stealth combined. The burst fire is a brutal barrage of shots that melts armour, especially when dual-wielded - its double the trouble.

Blitzgewehr - Stier Heavy Receiver
Now I’ll be honest, I’m not quite sure what the steel flechette ammo does, but at blistering pace this weapon steamrolls Nazis into putty, so it's well worth the upgrade, especially when combined with a Stier set bonus for mega damage.

Dieselkraftwerk - Nadel Napalm Injector
Let’s cut to the chase. Do you want to leave a burning puddle of napalm on the floor after every explosion? Then you need the napalm injector by Nadel. Paired with other Stier parts this is a dangerous weapon that causes excellent AOE damage after the initial chaos. What’s not to love?

Laserkraftwerk - Automatic Transformer
This turns your laser into an automatic, consistent beam that will literally disintegrate your enemies - it has to be seen to be believed. Pair it with Stier mods for raw damage and you’ve got a fantastic and fun means to ruin any Nazis day.