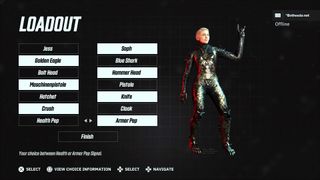 Arkane and Machinegames have combined for a mashup made up of two of their most famous franchises - Wolfenstein and Dishonored. Wolfenstein: Youngblood is covered in influence from both parties and sees you taking on hordes of Nazis as BJ’s dorky but dangerous daughters. Yet when you start the game you’re faced with quite a difficult task - which one do you pick? Read on and we’ll show you what starting choices to make to ensure you’ve got a character that fits your play style when you’re liberating Nazi occupied Paris.

For the sake of this guide, we’re not going to go over the cosmetic options, just the choices that have genuine effects on the gameplay of Youngblood. Choosing what type of suit, helmet or melee weapon doesn’t change anything beyond aesthetics, and the pep signal is given to the other co-op player depending on the one you choose, so it doesn’t matter as you’ll experience both regardless. Anyway, let’s get into the Wolfenstein: Youngblood starting choices that really count.

First off we have an important choice. Which sister will you choose? The answer is fairly simple - it’s all caught up in their weapon of choice. Jess gets kitted out with the scoped Sturmgewehr, which is a semi-automatic rifle which can be tuned to work as a sniper or a repeating battle rifle depending on the way you like to play. It also deals one kind of barrier damage, which works best against big bulky enemies like the laser soldiers.

Jess on the other hand gets the Kugelgewehr, which is essentially this game’s shotgun. It feels fantastic, deals incredible damage at medium range, and will destroy the opposite kind of barrier damage which is used by more organic enemies, but sometimes big robots and bosses too. You’ll get to use both of these weapons across your playthrough eventually, but for now - pick your favourite weapon and the sisterly choice will be made for you.

Personally, we’d pick Jess as her weapon is more versatile, but in this case it really doesn’t matter too much.

The next big choice is another one that doesn’t last for long (you’ll pick up both eventually) but it still will depend on what kind of gameplay suits you. The Maschinenpistole offers high fire rate at close range, and will deal great damage to organic enemies who are only wearing fabric suits. It comes with a Drum magazine too if you want to fire with reckless abandon. Bare in mind it performs poorly against metal-clad bulky enemies though!

The Pistole has better range and can take out enemies from a distance, but the fire rate is painfully slow. However! This can eventually be upgraded with fire rate mods that turn it into a burst fire cannon that is perfect for taking down bulky enemies as it deals great barrier damage to metal-clad Nazis. It gets better when you unlock dual-wielding too. If you’re leaning into the stealth side of things and… god love you if you do - the Pistole has a silencer, so it’s useful to mess about with until you inevitably set off an alarm.

Our pick would be the Pistole, as there’s already a very solid submachine gun in the game that makes the Maschinenpistole pretty obsolete.

This is by far the most important one to consider when it comes to gameplay. It costs five ability points to unlock the skill that you didn’t pick, which is a hefty investment at the start, so choose carefully!

Crush is an aggressive ability where the player rushes at enemies with brute force, knocking them on their haunches so you can finish them off with your weapons. It is incredibly useful when you’re facing up against tough organic Nazis - and is even better when its upgraded so you can take down the big burly guys. It also factors into the puzzling experience of Wolfenstein: Youngblood - you can rush through walls to access hidden crates.

Cloak is a stealth ability which makes your chosen sister turn invisible for a short amount of time. At the start, they’re limited to crouching with a knife and it only lasts for a very short amount of time, but this gets upgraded later. You will struggle to use this ability, especially when you’re playing with another person who has Crush, as the game is asking them to be aggressive whilst you’re playing defence. It doesn’t really make any sense, but it feels useless for most of the game unless you really care about it - but honestly you’re never rewarded for doing things stealthily, so what’s the point? Feels like a leftover power from Dishonored that doesn’t fit here.

So there you have it, a basic overview of the starting choices in Wolfenstein: Youngblood. We hope it’s made things a little easier. There’s nothing worse than getting stuck on the start screen!