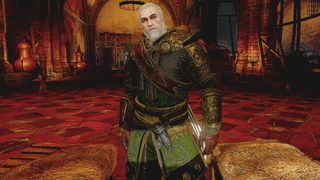 The best Witcher 3 armor will make all the difference as you explore, battle monsters and play Gwent. Okay, maybe not the last one but some good gear will help you survive, and look good doing it.

There'a big world in The Witcher 3 and almost all of it wants to kill you. You can find a lot of good armor exploring, as well as plans to craft more, but know where to go can cut the hassle and make getting new stuff a lot faster.

As well as find it. literally hundreds of different parts can be mixed and matched, divided in different categories, sets, and rarity. Not to mention using runes to enhance certain abilities. So it can be daunting to try and manage it all. Here’s our rundown to everything you should keep when kitting out Geralt with the best Witcher 3 armor

In The Witcher 3, armor is divided into three main categories: Light, Medium, and Heavy. At the same time, pieces are separated into chest, gauntlets, trousers, and boots. Each category has a significant impact on Geralt’s movement, and the preference will vary depending on your playstyle.

Wearing a light armor will give Geralt enough room to dodge more often without worrying about stamina that much, but enemies will hit harder. While I stuck with a heavy type of armor in the late game, I found medium gear to be the most balanced option, and the one that you’ll come across more easily during your ventures. The Witcher gear sets (below) are the most powerful pieces that you can find and craft, and each is perfect for a particular playstyle.

Keep in mind that, as well as with weapons, you’ll have to repair your armor from time to time. Durability can be recovered by paying a fee to any armorer or weaponsmith NPC, or by using kits that can be either found or bought from merchants. These can be used from your inventory at any time, and are divided into different types as well, varying how successful the repair will be in terms of recovered durability.

Where to find and how to craft Witcher 3 armor

One of the best things about armor being so dense in The Witcher 3 is that you can find new pieces littered pretty much anywhere. Most common enemies will likely drop a useless sword rather than a better chest armor for you, but it’s well balanced. Your best bet for looting, however, relies on chests scattered throughout the world, along with some quest rewards.

Merchants also tend to have an interesting selection of armor, so you should pay a visit to the nearest armorer in town. If you want to increase the number of NPCs from which to buy from, make sure to always do contracts that ask Geralt to kill monsters in an infested area. As soon as the job is done, townsfolk will come back to reclaim their homes, and it’s likely that one of them will have something new on sale.

As expected, the best gear comes from crafting, but you will need a diagram for each piece. These can be either found or purchased from merchants, which are used as blueprints to unlock the piece on the crafting menu, accessible at all times. In there, you’ll see the item’s description, stats, and needed materials.

Materials can be found in the wild, either as loot from bodies (or houses, depending on how much you care about morale) and inside chests as well. But there’s a key element at play, which is the ability to dismantle not only armor but also weapons and items that don’t have use in the game. It’s gonna cost a small fee from a blacksmith, but it’s worth it.

Even if you think that it’s pointless to pick up lower level weapons when you start wearing decent gear, always keep in mind that it can be turned into materials. In addition, dismantling gives not only materials but a lighter weight for Geralt overall.

Armor in The Witcher 3 is tied to a certain level. It is possible, however, to find, purchase, or obtain higher level gear for Geralt but it will be useless until you meet the required level (unless you just want to dismantle it.)

In addition, armor pieces can be upgraded with runes - items that increase stats for Geralt as long as the armor he’s using has slots for them. Some of them will increase the intensity of Signs, while others are advantages for Geralt’s movement speed, defense, and so on.

But that’s not all! The best armor in The Witcher 3 are sets, each representing a witcher school. Diagrams are needed once more, but there’s a catch, since all diagrams for each set have to be found individually throughout the world.

The sets are tracked through Scavenger Hunts, which are triggered once you find a map or a note talking about the whereabouts of each piece. These specific items can be purchased from merchants to obtain such quests, but can also appear as you’re doing question marks in the map and side quests.

There are six witcher sets, four of them part of the base game and two additional ones for each expansion:

Once you obtain and craft one of the witcher sets in The Witcher 3, you’ll notice they’re called Basic. This is due to the different tiers that such sets can be upgraded to: Basic, Enhanced, Superior, Mastercrafted, and Grandmaster.

In order to unlock the possibility to create Mastercrafted sets, you’ll have to talk with a master armorer. Fergus Graem, located in Crow's Perch, Velen, unlocks the “Master Armorers” quest. The minimum level for this mission is 24.

Grandmaster gear is exclusive to Blood & Wine, allowing you to create level 40 versions of each set. You’ll have to find and talk to Grandmaster Smith in Beauclair, unlocking the grandmaster scavenger hunts.

They’re all tied to certain levels, and in order to perform the upgrades, you’ll need to find the corresponding diagrams for each tier. It’s also advised to not get rid of the former set since Geralt can’t create an Enhanced set from scratch.

So, in order to jump from Basic to Enhanced, for example, you’ll need to have each piece of armor either equipped or on your inventory, plus the required materials and crowns. Keep in mind that while armor sets will get better stats with each tier (and become even more stylish) the cost will be significant.

It’s not necessary to have the entire set to start using these armor pieces, but the stats will be much better if you wear it all together. Scavenger hunts can be daunting at first, but as long as you keep track of them as you progress through the game, it’s likely that you’ll find them early, and be able to make the most of them.