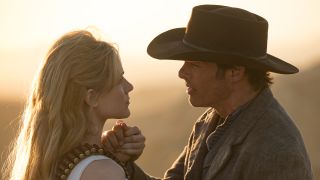 It wasn’t a case of “difficult second album” syndrome for Westworld, the edgy HBO series based on the classic 1973 film about a Western theme park populated  by androids. Season 2 – which introduces a new Shogun World as the Hosts' revolt continues, as well as tackling the controversial topic of data mining – is just as strong as the first.

If you missed it when it first aired, don't fret – it’s now coming out on home entertainment formats. They come with two and a half hours’ worth of bonuses, including behind-the-scenes featurettes on all 10 episodes, and three lively round-table interviews with trios of cast.

Thanks to Warner Bros Home Entertainment, we have four Blu-ray box sets to give away. To put your name in the hat for the chance to win one, simply answer the question below: