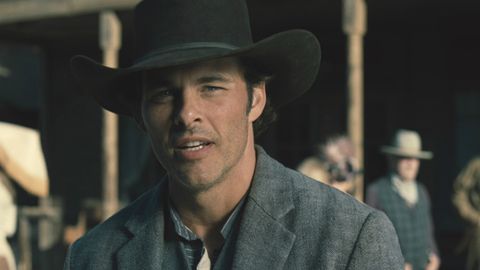 Episode 2 swaps action for exposition as we find out more about how the park came to be and see the return of some fan favourites.

After hooking us with a confusing, intriguing, and question-filled premiere, the second episode of Westworld season 2 - Reunion - is exposition heavy, and while it tells us a lot about the park, it fails to really drive the main story forward much. This is still Westworld though so it makes for incredibly interesting TV, but the action and pace of the first episode is gone. When you have as many plot threads as Westworld does, you have to be ok with ignoring some for a while in favour of others, and anyone who is a fan of the show will be used to this kind of story-telling, which is why it’s ok to put Bernard’s story on the back-burner for now and find out how the park came to be. Yes, that’s right - this is what you’ve been waiting for. William (Jimmi Simpson) (AKA, young Man in Black) is back and much of the episode is spent outside of Westworld, telling the story of how it came to be.

Note: From here on out there are plot spoilers for Westworld season 2, episode 2 - Reunion.

Through flashbacks we see Logan (Ben Barnes) first approached about Westworld and how impressed he is by the Hosts leading to DELOS’ original investment, but it’s witnessing William convince Logan’s Dad James Delos (Peter Mullan) - noticed that last name did you? - that the park is worth more of their money after his ‘holiday’ that’s really interesting. Watching Simpson play a version of William which definitely isn’t the kind-hearted soul we know from the first season, but also isn’t anywhere near the bloodthirsty monster of the Man in Black, is off-putting at first. You recognise him and yet you don’t. It’s like he’s a completely new character for season 2 and we’ve yet to figure him out. Barnes also makes a welcome return and switches between the privileged playboy we know and love and a more heartbreaking version of himself post-season 1, which whispers of deeper levels to come.

What did the Man in Black build in the park?

Meanwhile, back in the park, Dolores and Angela have found a way into the back rooms of Westworld and as well as showing Teddy’s his true ‘history’ they interrogate the workers to find out who will be coming for them. It’s clear that just because the Hosts are ruling Westworld in the moments after the gala, they’re not naive enough to think it will stay that way for long and Dolores is determined to keep them all free by any means necessary. Just like William, this new Dolores is almost a new character with her hardened heart and cut-throat survival instincts, but she’s much more easily recognisable to us because we’ve been on her journey of self-discovery with her. While we’re still missing parts of William/the Man in the Black’s story, Dolores’ tale is all too familiar to us, which makes for a rich and detailed character that you’ll struggle to tear your eyes away from.

She’s not the only fearless female character in Westworld though, and episode 2 sees two of the strongest women in the show finally together again - Maeve and Dolores. Last time the two Hosts came face-to-face they were very different people and fans have no doubt been waiting for their team up ever since they kicked-ass individually in season 1. Sadly, it seems they’ll have to wait a little longer as the pair don’t immediately become best buddies, but this in itself speaks to how human the Hosts have become. They each have their own goals, paths, and ways of doing things and neither Dolores nor Maeve will be told what to do anymore, especially by each other. It’s a brief exchange in the entire episode, but one not easily dismissed or forgotten and no doubt a tease of things to come.

"[SPOILER] IS ON WESTWORLD WHAT THE F***" – The internet reacts to Westworld season 2, episode 2

All of this is pretty straight-forward and while fans will lap it up, it’s missing the usual Westworld tropes of confusion and questions. These come courtesy of the Man in Black who is on a mission to find and destroy something he created in the park all those years ago. What’s that, I hear you ask? We’ve no idea! But it’s clear that Dolores is after the same thing and while she calls it a weapon, the Man in Black says it’s the worst mistake he’s ever made. What could William have built within the park and why will it helps the Hosts? There’s a good chance it’s got something to do with that ocean, which appeared out of nowhere in the first episode, but for now we’re left guessing. The Man in Black is still having fun, but he makes it clear in this episode that his end-game is to ‘burn Westworld down’, which is a little strange for someone who enjoys his vacations there so much. Could it be that having got what he wants - a real game, with real stakes - he now just wants to win and move on? Maybe, but if he achieves that, we’re going to struggle with who the Man in Black is outside of his obsession with Westworld. Unless William’s storyline fills in the gaps...

Reunion doesn’t really work as a standalone episode; it’s so full of flashbacks that will only mean something to hardcore fans. But then, what episode of Westworld does? Hell, what TV episode does anymore?! We continue to move further and further away from single episodes which can be enjoyed on their own - and even some movies (just ask the guys at The New Yorker who are struggling with Avengers: Infinity War) - but that’s just the price you pay for the vast and varied world series like Westworld build. If you’ve been with Westworld from the beginning, you’re going to love this episode despite it’s lack of action, but if you’re new to the game, you need to start at the beginning… or at least with our Westworld season 1 recap. You have to dig deep to really appreciate the complexity of Westworld, but there’s gold to be found if you can.

Episode 2 swaps action for exposition as we find out more about how the park came to be and see the return of some fan favourites.