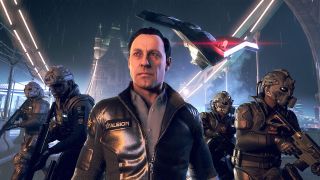 Ever since causing a storm with its E3 2019 reveal last month, we've been asking big questions about how Watch Dogs Legion really plays in practice, but Ubisoft's answers continue to assure us that this really could be something special.

It's "Play as any NPC" premise is exciting, for example, but how does that affect the quality of the central narrative if we're losing a fixed protagonist to latch onto and root for? Thankfully, in a recent interview for Spiel Times, Watch Dogs Legion's Game Design Director Kent Hudson promises that storytelling remains a key focus for this third instalment in the open world series.

"I know 'play as anyone”' is kind of a crazy technological innovation with the simulation we’ve done, but story is still a huge part of the game", explains Hudson. "It’s a huge part of the franchise and this game is no different. We’ve got five different storylines in the game, so it’s five main – you could call them quest lines if you want - and each one of them is tied to one of our thematic pillars."

Well, colour me impressed. Five different quest lines, each focused on a distinct aspect of dystopian London, certainly sounds ambitious, and enough to dig our teeth into, even if there's no Aiden Pearce or Marcus Holloway front running those plot points this time around. Instead, we'll be pursuing those story arcs as whoever we want to be, including the tough as nails pensioner we played as in our Watch Dogs Legion E3 2019 preview. Grannies for the win!

For more, check out all the other E3 2019 games that we saw earlier this year, or watch our Release Radar video to discover everything else out this week.