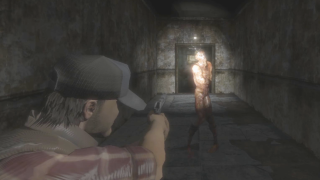 I know, I know. The sting of Silent Hills' cancellation still weighs heavy. But these things happen, more often than we know. For example, did you know that Climax Studios, the developer behind Silent Hill: Origins and Silent Hill: Shattered Memories, had a concept and pitch for a PS3 entry in the long-running franchise? It never got a proper title, but YouTube channel PtoPOnline still managed to get a hold of some gameplay footage:

For those who are confused over the obvious lack of polish, this is what's called a "vertical slice" - a short, unfinished demo meant to sell the game a developer is working on to publishers. It's designed to give potential investors a feel for the finished product, though many models, sound effects, and other finishing touches are placeholders. Still, you can get the basics: spooky, maze-like levels, puzzles, enemies, combat, and the gimmick of time periods bleeding together.

Sadly, the game never progressed beyond this stage. When Konami declined to back the project, Climax dropped the Silent Hill name and tried to sell it as an episodic adventure called Broken Covenant. That too fell through, and what you see above is all that will likely ever come of the team's work.

Sorry, not a lot of Silent Hill-related stories have had happy endings lately.