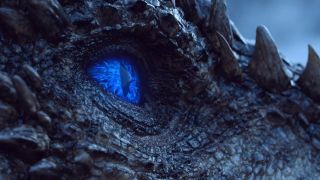 In what might just be the weirdest story you’ll see all week, Viserion’s re-appearance in Game of Thrones season 7 has a big secret. The audio for the dragon’s scream was actually the result of a bunch of fans getting really, really sozzled on gin (we’ve all been there) and recording audio that would later be remixed into one of the season’s key moments. That’s not how my Friday nights typically turn out.

It’s all the work of sound designer Paula Fairfield. According to one of the, ahem, dragon voice actors (via Winter Is Coming), she grabbed a bunch of Thrones fanatics for a recording session and gave them one direction: “Get drunk and weird with it.” You can imagine what the response was…

The Night Queen, a cosplayer at the annual Con of Thrones in Nashville, also elaborated further on the process, saying: “We just, like, took an evening, drank a fuck-ton of gin and screamed our hearts out, and sent ’em off. And then she came and watched the finale with us, she never told us what it was for. And then when it was all over, she leaned over and was like, ‘You guys are the ice dragon’.”

That’s one way to learn you’re in Game of Thrones! As for the sound itself, you can check out a video of it above. The moment in question – spoilers for those who haven’t seen the Game of Thrones season 7 ending yet – features a resurrected Viserion under the control of the White Walkers.

It’s pretty hard to distinguish the fans’ cry – though you definitely get a hint of the alleged jackhammers used in recording Viserion’s screech – but it’s still pretty amazing nonetheless. I wonder what audio oddities Game of Thrones season 8 will bring?

I thought nothing could beat out these wacky Game of Thrones theories. I was clearly wrong.