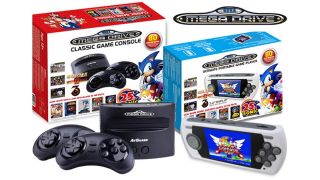 Remember that cute little miniature NES that Nintendo announced two weeks ago? Well Sega fans (or at least those of you in Europe), your memories are about to get snack-sized too. An officially licensed mini-Mega Drive is also coming, and it has both a sizable library of 80 games packed in, as well as support for your original cartridges. That's more than twice the number of games the mini-NES has or will ever have, and a feature Nintendo's upcoming mini-console lacks. The mini-Mega Drive is also the same price as its competitor: £50.

"More games, support for what I already own, and for the same price? What's the catch?" I'm glad you asked, friend. For one, where the mini-NES uses HDMI to connect to modern TV, the mini-Mega Drive uses AV cables, so I hope you've got some retro connection ports to go with your retro love. Second, the mini-Mega Drive is an officially licensed product, but is not manufactured by Sega - this is unlike the NES Classic Edition, which comes straight from Nintendo.

Which brings us to the final point, the company actually making this thing.
Judging by the logo emblazoned on the front, it appears that the mini-Mega Drive comes from AtGames, which has been making these sorts of devices for years now. And unfortunately, the emulation software it uses isn't great. Check out this nightmarish rendition of the iconic Green Hill Zone theme from Sonic The Hedgehog:

Of course, it's not my place to suggest how you spend or don't spend your money. If the pros outweigh the cons, you can pre-order the mini-Mega Drive over at Funstock. A US release has not been announced.