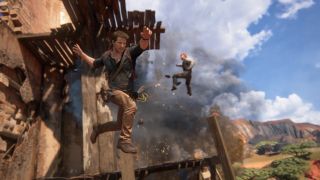 It’s not much of an understatement to say Amy Hennig is Uncharted. Well, was. She had been director on the first three games (creating the series when Neil Druckmann was only a designer and Bruce Straley an artist on the first title). And she made a start on Uncharted 4 before leaving in… slightly odd circumstances.

At the time there were rumours that the departure (which also saw some of the cast walk due to “weird changes”) might not have been under the best of terms. Plus talk from Nolan “actual Nathan Drake” North revealed that the new creative team of Straley and Druckmann threw out eight months of work when they took over.

Whatever was lost of the original version, Any’s tweeted out a little mention that “a lot” of her work is still in the final game.

I’d love to know more about where the joins are between old and new but it’s likely we'll never know for sure. Still, it’s nice to hear it’s not all bad blood between everyone. Amy also tweeted a message of support for Neil, pointing out that he’d put as much work into the game as she did.

Leon Hurley
In former lives Leon's been a scientist, a musician and teacher, stints that included a shoe full of liquid nitrogen, a small tour of Germany and oh GOD so much marking.
Gaming deals, prizes and latest news