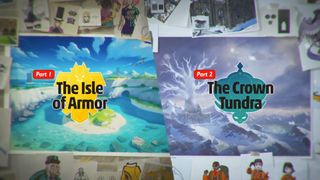 It's just a small part of what you'll eventually get to experience with the two expansions contained within the pass – called The Isle of Armor and The Crown Tundra – but it's a way to keep you ticking over until they arrive in June and Autumn respectively.

At some point today, an update will arrive for Pokemon Sword and Shield. You'll need to download it, make sure your game is patched, and then head into Galar. Then, you'll want to head to Wedgehurst station. It's here that you'll meet a special trainer who will eventually become your rivals in the Isle of Armor - that's the Poison-type favouring Klara for Pokemon Sword and the Psychic-type loving Avery for Pokemon Shield.

It seems that they will give you a brand new Pokemon for just chatting to them: the brand new, and somehow even dopier, Galarian Slowpoke.

If you did want to go on to purchase the Expansion Pass, it retails for £26.99 / $29.99, and will get you two distinct expansions: The Isle of Armour, due in June, and The Crown Tundra, due sometime in the Autumn. For purchasing the Pass, you'll also get a special bonus in the form of a Pikachu Uniform and an Eevee Uniform that you can wear straight away, both in the base Sword and Shield games and the upcoming pair of expansions. You'll receive an email with codes for both uniforms after purchasing the Expansion Pass, which you can then redeem by going to Mystery Gift > Get with Code/Password.