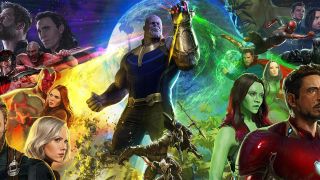 Thought you were ready for Avengers: Infinity War? You ain’t seen nothing yet. Marvel has dropped the second of two Infinity War prequel comics, called - shock, horror - Infinity War Prelude. Serving as both a recap of everything MCU up until this point, as well as a superhero sampler for what’s to come, there’s plenty hidden in the panels that you might be missing out on.

Thankfully, I’ve run the spoiler gauntlet and brought you everything you need to know about the Infinity War prequel comics – and what they mean for Infinity War. There may well be spoilers ahead.

Bucky has been 'rebooted'

Spoilers for Black Panther incoming. If you haven’t seen it then A) What is wrong with you? and B) Bye-bye. For now.

With Bucky Barnes put on ice (literally) in Wakanda, the post-credits scene tagged onto the end of T’Challa’s first standalone movie asks more questions than it answers. How’s Bucky doing? How did he get better, if at all? The first issue of the Infinity War Prelude answers that: Shuri has worked her magic.

While Black Panther’s little sis is all too keen to point out that there’s no “delete button” for Sgt. Barnes’ predicament, she has managed to reboot him. It begs the question: can Bucky still be controlled and, if so, by whom?

Hawkeye is officially finished with The Avengers

That’s it. No take-backs. Clint Barton has hung up his bow and arrow and completely called it quits as an Avenger. The last time we saw him, in Captain America: Civil War, he was living the family life he’d always dreamed of. The prelude comic reveals that, once Captain America rescues Hawkeye from his imprisonment in the raft, the marksman is well and truly done. Of course, a certain Thanos might bring him back from the trappings of civilian life…

Ok, this is worrying. Shuri is in the midst of pointing out to T’Challa just how much smarter she is than Tony Stark when she offhandedly reveals that she’s figured out a better, easier way to create AI similar to Iron Man’s rogue creation - Ultron. That spells trouble for the MCU and, more imminently, Wakanda – as Shuri is looking to immediately implement these improvements in her home country.

Cap has already been to Wakanda

Not the biggest bombshell, granted. However, before Wakanda’s reveal to the world, very few knew of its existence. For Steve Rogers to be allowed on such hallowed ground speaks volumes about the respect he is given. It also gives us an indication (along with Bucky being there) as to why he ends up fighting in Wakanda in Infinity War. It seems all roads are leading to Wakanda; it’s setting up to the be the movie’s crucial battleground.

The very end of the first prelude issue signals a significant shift in how we might come to see Tony Stark in Infinity War-proper. He’s preparing for (in his words) “the end of all things.” Thanos is obviously on the way, but Tony is too stubborn to swallow his pride and give Cap a call. Iron Man’s mission is clear: he’s taking on this new threat. Alone. I have a feeling that he might come to regret that way of thinking.

Nobody knows where the Soul Stone is...

Much of the second prelude issue deals with Doctor Strange and Wong going over the locations of all six of the Infinity Stones. Subtle exposition, it is not. However, Wong plays up the fact that no one knows where the Soul Stone is. For the reams of knowledge he has at his disposal in the Sanctum Sanctorum, he doesn’t have a clue as to where the Soul Stone might lie. With this piece of information, it’s hard to look past the idea that the location of the Soul Stone will be the big reveal in Infinity War, possibly serving as a stinger before Avengers 4 next year.

...but we now know it's the most powerful Infinity Stone

Wong said so himself. “It could be the biggest threat of all” hardly sounds like something that would cheer up the Sorcerer Supreme. We don’t know what it does (for now) and Wong is reluctant to reveal exactly what the final Infinity Stone is capable of and, yet, it’s something that we absolutely can’t wait to find out. For reference, we have Stones that can rewind time, take over people’s minds, create all-powerful Avengers, distort reality and spark dance-offs. If it’s bigger and badder than all of those – Iron Man, Cap and co are in for the fight of their lives.

For another look at what Infinity War may have in store for The Avengers, check out our definitive guide to the Infinity Stones.