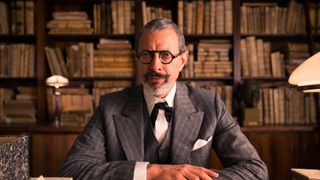 Marvel just confirmed a bundle of new and returning talent for Thor: Ragnarok, including Cate Blanchett and Jeff Goldblum as a pair of powerful villains: Hela and the Grandmaster. Other new faces include Karl Urban as the Executioner and Tessa Thompson as the heroic Valkyrie (confirming some earlier reports).

Yes, Jeff Goldblum is finally joining the Marvel Cinematic Universe. If you're not familiar with the Grandmaster's role in the comics, he's one of the oldest beings in the universe and he passes the eons by mastering every manner of game conceivable - especially the kind that involve pitting superpowered folks against each other. I can't wait to see Jeff Goldblum mess with Thor and friends.

Speaking of Thor's friends, the announcement also confirmed that the Incredible Hulk will also have a starring role in Thor: Ragnarok. Mark Ruffalo previously said it would be a "buddy picture" starring himself and Chris Hemsworth. Watching the angry green giant rampage around the pristine halls of Asgard sounds almost as good as watching Jeff Goldblum sell Heimdall artisanal knots.

Directed by Taika Waititi and starring Chris Hemsworth, Tom Hiddleston, Jaimie Alexander, Tessa Thompson, and Mark Ruffalo, Thor: Ragnarok will open in UK cinemas on October 27, 2017 and in the US on November 3, 2017.