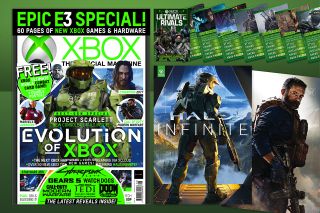 It's OXM's awesome E3 spectacular! Official Xbox mag brings you all the news on Xbox Project Scarlett, xCloud Streaming and over 50 new Xbox games, as announced at the world’s biggest games industry reveal in LA. We have all the details of Xbox’s future plans, and we preview all of the new games in our massive E3 round-up! With the rise in battle royales and free-to-play multiplayer games as service, OXM investigates the future of single player campaigns. We talk to Jesper Kyd, the man behind many of Xbox’s most brilliant game soundtracks for our Big Interview. Plus we’ve packed the mag with over 20 pages of reviews of the latest Xbox releases too. Plus we have a giant double-sided Call of Duty Modern Warfare and Halo Infinite poster, plus OXM's Ultimate Rivals combat card game - all free with the latest OXM.

It's that time of year again when we get really excited for the future, as the E3 conference in LA throws out one exciting announcement after another. We have lots to report from Microsoft's triumphant E3 presentation, where they unveiled a ton of games as well as xCloud streaming, Game Pass Ultimate and much more on Project Scarlett, including an ETA for that and its launch title Halo Infinite.

It's not just Halo Infinite we're getting excited about though. We have tons of news on Marvel's Avengers, Cyberpunk 2077, Call of Duty Modern Warfare, Star Wars Jedi: Fallen Order and more in our massive E3 preview.

We love our Xboxes, every generation has thrown up some bona fide video game classics. Find out the story behind original Xbox game Outrun 2006 Coast 2 Coast in this month's OXM.

Jesper Kyd is one of the most critically lauded composers working in videogames, and he's the subject of our Big Interview this month. Find out what goes into composing the themes to the likes of Assassin's Creed, Hitman, State of Decay 2 and more.

Tempted by an Xbox One X? We'll be searching for the best bargain Xbox bundle in our round-up of the Amazon Prime Day game deals