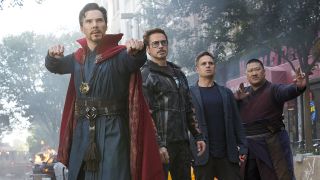 After this, we might be begging for Thanos to come back. An Avengers: Endgame photo not only revealed someone else who has (possibly) survived the snap, but it might have just opened the floodgates to a whole bunch of Skrull fan theories. That’s right: someone in the MCU might already have been taken over by the shape-shifting Skrulls. So, we can’t trust anyone now. Great. Possible Avengers 4 spoilers to follow...

Benedict Wong posted a fairly standard behind-the-scenes Avengers 4 photo, essentially confirming Doctor Strange’s trust lieutenant, Wong, is all a-ok after the events of Avengers: Infinity War. Except… WHAT THE HELL IS THAT AT THE BACK OF HIS HEAD?! OH GOD. OH GOD. KILL IT WITH FIRE.

Happy to be filming @avengers 4 .But the cleaning of spoilers is a bit much!🤫 👨🏿‍🎤 Benedict Wong

Reddit being Reddit, its members have come up with a bunch of interesting Avengers 4 theories that could tie not only into Captain Marvel but the MCU-at-large. It does help explain the weird prosthetics popping out of Wong’s head, too.

007inNewYork believes Wong might be a Skrull in disguise, especially as they’ve already been introduced as coming to Earth (retroactively, at least) over two decades prior to Infinity War. It gets more interesting.

JavelinTF2 puts forth the theory that the Skrulls actually invade the Earth post-snap when everyone’s at their weakest. Here’s the kicker: they impersonate people, making everyone believe they’ve survived the snap, when they’ve actually been turned to dust and the Skrulls have just swooped in and taken over their identities. Honestly? I think that’s my favourite theory ever. Make it happen, Marvel.

This, of course, all stems from the Secret Invasion, a comic book series which involved the Skrulls invading the planet and impersonating several superheroes. If the MCU manages to pull it off, it could end up with us questioning every single person in every single movie. Now that is how to keep us invested in Avengers 4 and beyond.

We don't know what's going to happen but the current slate of new Marvel movies sure looks even more exciting now...