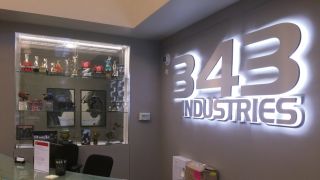 343 Industries is the Microsoft-owned development house of the Halo series, and it's darn proud of it. Regardless of where or when they signed on, employees need to appreciate where the franchise came from and how it's grown. That's why 343 dedicated a space in its Redmond, WA headquarters to a Halo museum.

GamesRadar+ got the chance to visit the museum earlier this month, and today we'd like to take you on a tour. So join me, as we walk the path of Spartans.

The Halo museum is organized semi-chronologically, with the original Halo and all of its assorted memorabilia collected into one, neat case. An inauspicious start to the tour, especially compared to the zaniness you'll see later.

The first project from 343 Industries was a remake of the original Combat Evolved, and was widely hailed as the proper way to handle a reworking of classic gameplay. This version still runs on the old engine (meaning the physics and bugs are just as you remember 'em), and even lets you swap between the new and old graphical styles on the fly. It's a celebration of the Halo franchise's beginnings, and something 343 is clearly proud of.

Halo 2 paved the way not just for Master Chief and co., but Xbox Live as well. Here, you can start to see the beginnings of Halo as a serious multiplayer game.

While the first two games in the trilogy certainly have their fans, it was Halo 3 that broke records and took the brand from video games to a multimedia empire. And yes, that is a Mountain Dew. Hey, cross-promotional sugar water is part of history too.

A side-story that unfolds during the events of Halo 3, Halo 3: ODST focused on the Orbital Drop Shock Troopers (ODST) that fought off the Covenant left on Earth when Chief jumped into hyperspace with a Prophet's fleet. The Brute costume you see was used in this fabulous, surprisingly heartfelt commercial.

The final game from Bungie but the first chronologically, Halo: Reach is one hell of a bang to end on. Rather than tell another tale of the invincible Master Chief, this prequel cast you as a member of Noble Team, a squad of Spartans that were picked off one-by-one until even you fell to the Covenant horde. And while you won't see it close up, the Elite costume you see here was employed in the emotional "Deliver Hope" commercial.

While the dreams of a Hollywood feature film set in the Halo universe may be forever dashed, at least fans got some semblance of live-action Master Chief with the Halo 4 prequel/tie-in, Forward Unto Dawn. Cool trivia about the suit: it was worn by actor Daniel Cudmore, who measures in at an intimidating 6'6". Cudmore is also known for playing Colossus in the X-Men films (that's the movies with "X-Men" in the title, not Deadpool).

343's first original contribution to Halo was met with split opinions. Some were hesitant to see veteran studio Bungie leave the series, while others embraced a more Call of Duty-inspired design philosophy. The new Master Chief suit is still sometimes worn for charity events and special occasions.

While part of 343 Industries worked to get Halo 5 into pre-production, other portions of the studio were diligently remastering Halo 2 in the same vein as Halo: Anniversary, and then packaging it together with the three other games in which Master Chief starred. The result was The Master Chief Collection, which was rock-solid... as long as you didn't try the multiplayer, which was broken for weeks after release.

Another live-action film project, this one produced by legendary filmmaker Ridley Scott. Nightfall introduced us to Agent Locke, who would go on to be a major part of Halo 5: Guardians. More grounded and gritty than the smooth sci-fi look of previous Halo projects, Nightfall also starred Mike Coulter, who went on to be Luke Cage in the Marvel Netflix series… uh, Luke Cage.

The first proper Halo game on Xbox One (no, we're not counting The Master Chief Collection), Halo 5 had a lot to live up to. Whether it succeeded is still debated, but you can't deny the ridiculous amount of marketing that led up to it.

Spartan Assault and Spartan Strike took the Halo universe mobile, transforming the FPS into an isometric, tactical run-and-gun game. Assault would eventually come to PC and Xbox One, while Strike remains on mobile and PC, no console release.

As I said, Halo is far more than a game series now. Action figures and collectibles run the gamut from small and kid-friendly to big, expensive statuettes.

Much like The Animatrix, Halo Legends is an anthology collection of animated films set in the Halo universe. Some are better than others, but the art is undeniably beautiful.

Whether these were used as props in commercials or part of costumes, these guns are the real deal. That DMR is heavy.

Did you know Master Chief has had his face (well, his helmet) plastered onto the underside of skateboards, snowboards, and NASCAR cars? Neither did I. But we know now.

As we leave the lobby of 343 Industries, a life-size statue of Master Chief lets us know that he'll be here to watch over everything, and keep us safe. Godspeed, Chief.