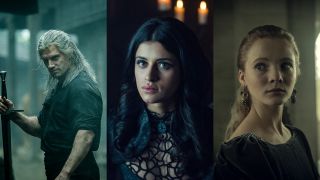 Out of all the beasts and monsters that Geralt faces down, The Witcher timeline might be the most fearsome. It weaves and winds its way throughout the Netflix series; all eight episodes take place across several decades and envelopes the three major characters of Geralt, Yennefer, and Ciri. And it's not always as easy to follow as you might have hoped, especially on a rewatch.

That's where GamesRadar+ comes in. We've gone from Broklion to Blaviken and tracked down all the clues and timeline nods to make the whole experience a lot less stressful. There's even the official Witcher Netflix timeline to fall back on, should you need a fancy graphic to accompany you across The Continent. We've even updated our own Witcher timeline with what year each episode takes place in.

But first, SPOILER WARNING! The following contains huge spoilers for all eight episodes of The Witcher Netflix series.

YENNEFER ARC: Born with curvature of the spine and ostracised by her village, Yennefer of Vengerberg’s magical powers lead to her being headhunted for a place at the magical academy in Aretuza. Episode 1.02, “Four Marks” (1206)

YENNEFER ARC: Yennefer completes her training and “ascends”, going through a painful process to remodel her body – the price of beauty is the loss of her ability to bear children. She successfully manipulates her way into the position of court mage in Aedirn, the capital of Vengerberg, instead of her original posting in Nilfgaard. Fellow student Fringilla is sent to Nilfgaard in her place. King Dagorad, father of Queen Calanthe, is on the throne of Cintra. Episode 1.03, “Betrayer Moon” (1210)

GERALT ARC: As a child, Geralt is abandoned by his mother to train as a Witcher with the legendary Vesemir. Episode 1.08, “Much More”

GERALT ARC: Masquerading as another mage called Irion, Stregobor asks Geralt to kill Princess Renfri of Creyden, believing she’s a monster because she was born under the so-called Curse of the Black Sun. When Geralt kills her in Blaviken, she tells him: “The girl in the woods will be with you always. She is your destiny.” It’s a reference to Princess Cirilla (Ciri) of Cintra. Episode 1.01, “The End’s Beginning” (1231)

YENNEFER ARC: Accompanying Queen Kalis of Lyria and her baby daughter on a journey from Aedirn, Yennefer’s coach is attacked by a mage and his bug monster. After escaping through several portals, Yennefer decides it’s impossible to save Kalis (the target), leaves her behind, and takes the baby. The baby doesn’t survive, and Yennefer decides to go independent. Episode 1.04, “Of Banquets, Bastards and Burials” (1240)

GERALT ARC: Triss Merigold, a mage to the court in Temeria, enlists Geralt to deal with a dangerous Striga that’s terrorising the kingdom, and also has an unexpected connection with King Foltest. Episode 1.03, “Betrayer Moon” (1243)

GERALT ARC: As a favour to Jaskier, Geralt ends up in court at Cintra, and ends up playing an unexpected role in the marriage of Queen Calanthe’s daughter, Princess Pavetta. Geralt is magically and inescapably bound to Pavetta’s unborn daughter, Ciri, via the Law of Surprise – but Calanthe still banishes him from Cintra. Episode 1.04, “Of Banquets, Bastards and Burials” (1249)

YENNEFER ARC, GERALT ARC: While attempting to cure Jaskier of the after-effects of a close encounter with a nasty djinn, Geralt meets Yennefer for the first time in Rinde – the start of a very complex relationship. Episode 1.05, “Bottled Appetites” (1256)

GERALT ARC, YENNEFER ARC: Some years after the Law of Surprise was invoked, Geralt returns to Cintra to take Ciri away so he can fulfil his obligation to keep her safe. Calanthe refuses. Episode 1.07, “Before a Fall” (1263)

Yennefer returns to Aretuza, where she meets her old teacher, Tissaia De Vries.  An emergency conclave of northern wizards is called to discuss the threat of Nilfgaard’s advancing armies. They vote to do nothing to protect Cintra. Episode 1.07, “Before a Fall” (1263)

CIRI ARC: Queen Calanthe leads the Cintran army into battle against Nilfgaard and is gravely wounded. The city is taken, Calanthe commits suicide and Ciri is forced to go on the run. Episode 1.01, “The End’s Beginning” (1263)

GERALT ARC: Simultaneously, Geralt escapes captivity from a Cintran cell, and starts looking for Ciri. Episode 1.07, “Before a Fall” (1263)

CIRI ARC: Ciri ends up in a camp of refugees from the attack on Cintra, and befriends an Elf called Dara. They subsequently run away. Episode 1.02, “Four Marks” (1263)

CIRI ARC: Ciri and Dara meet the Dryads, who invite them to stay. While there, she has visions of a crazed Cahir, an agent for the Nilfgaardian emperor. Meanwhile, Nilfgaardian mage Fringilla uses forbidden magic to track Ciri’s location. Episode 1.04, “Of Banquets, Bastards and Burials” (1263)

CIRI ARC: Cahir and Fringilla hire a shapeshifting Doppler to capture Ciri. He takes the form of Cintran mage Mousesack – Ciri embraces him with open arms when he arrives in Brokilon. Episode 1.05, “Bottled Appetites” (1263)

CIRI ARC: With Dara having abandoned her, Ciri is once again among Cintrans. When some old friends attack her, however, she kills them with unexpectedly powerful magic. Episode 1.07, “Before a Fall” (1263)

GERALT ARC: Geralt ends up in the Cintran refugee camp where Ciri had been earlier, only now it’s been completely destroyed by Nilfgaard. While there, he’s bitten by something nasty. Episode 1.08, “Much More” (1263)

CIRI ARC, GERALT ARC, YENNEFER ARC: Yennefer agrees to join the mages to make a stand against Nilfgaard at Sodden, a key strategic location crucial to stopping their advance. It does not go well.

Meanwhile, by coincidence it turns out the merchant who helped Geralt survive his monster bite is married to the woman who’s taken Ciri in. Geralt and Ciri are finally united in the woods, just as Renfri prophecised, and the timelines are aligned. Episode 1.08 “Much More” (1263)

Helpfully, Netflix has also released a graphic detailing the major plot points covered across The Witcher timeline. You can see it for yourself below.

A quick crash course in the multiple timelines of The Witcher. #TheWitcher pic.twitter.com/qdBVq7ih7RJanuary 7, 2020

Fancy a new TV show to watch? Then why not check out our best TV shows of 2019 list to discover your next binge.