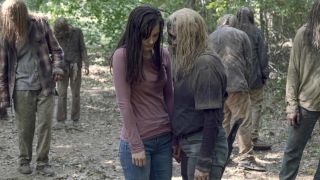 Guardians, as the title for The Walking Dead season 9, episode 12 implies, examines the lengths we’ll go to protect the people, things, and ideas we care about. That thematic underlay gave this chapter of The Walking Dead a much better sense of cohesion, pace, and purpose than the previous episode, Bounty, threading together otherwise unrelated story threads through this framework of leadership under strain.

What will The Walking Dead movies be about?

Michonne is struggling to avoid being a tinpot dictator as her dogmatic obsession for absolute security comes at the expense of Alexandria’s communal well being, vetoing her council’s desire to participate in the community-wide fair. Eugene is working to accept the fact that Rosita is with Gabriel for good, and their new co-parenting arrangement with Sadiq probably won’t involve him, even if he is great at making pregnancy pants. Negan is voluntarily back in his cell, but still trying to talk his way out of it by offering up his services as an enforcer to keep people in line for Michonne, while Alpha is struggling with her own internal Whisperer politics, as dissatisfied followers challenge her decision to rescue Lydia from Alexandria.

While both Michonne, Gabriel, Negan, and Eugene all show a willingness to give up some of their own selfish interests to make concessions for the greater good, Alpha responds with a bloody riposte, severing the neck of her challenger before serving up the head as a consolation present to the victim’s lover. It plays out like something out of Mortal Kombat, and is undoubtedly meant to certify her status as a villain to watch out for, but also reveals a more subtle difference that distinguishes right from wrong in the apocalypse. Alpha treats power as though it were the most valuable currency around, whereas those at Alexandria recognise the greater reward of generating trust, goodwill, and respect.

Guardian’s focus on the workings of the Whisperer’s camp is just as creepy as Alpha herself, from the way they gruesomely prepare zombie faces like its arts and craft week at school, to the hushed tones with which they address each other even when there’s visible anger bubbling under the decaying skin. If Lydia had to be taken back there, only to escape again, just for the sake of being our eyes and ears into this off-kilter community, then it’s a worthwhile payoff. Even though it meant seeing Henry play the village idiot yet again.

Yes, as I predicted last episode, Henry’s foolish rescue attempt fell apart almost as soon as he appeared on screen, as it turns out Beta - Alpha’s second in command - had been tracking him this entire time. Good thing for Daryl and Connie, then, who rescued both him and Lydia in the episode’s climax, and appear to be striking up an unlikely partnership as a duo who prefer to speak with actions rather than words. Does romance beckon for our favourite biker boy? Maybe, but Connie will have to fight with “Dog” for Daryl’s full-time affections first.

Back at Alexandria, Michonne eventually rescinds her veto power to allow the council vote in favour of Alexandria’s participation in the fair, after a candid chat with both Negan and Judith reveals that she’s unfairly holding her own community at ransom. I’m happy to see the character finally beginning to internalise this aspect of her post-Rick nature, as this angry, stubborn version of Michonne was starting to get a little grating, not to mention out of character for a leader who has always had her moral compass pointing in the right direction. It’s good that AMC recognised this too, as the last thing anyone wants to see before Danai Gurira bows out next season is Michonne acting a hair’s breadth away from anti-heroism.

I also appreciate the fact that we still can’t quite pin down Negan’s place in this new world, or indeed whether he really is a changed person or not. While his decision to return to Alexandria’s cells is a positive sign, the character’s words to Michonne were still flavoured with the language of authoritarianism, which still clearly appeals to him as an ideology. Judith believes the former Saviour is now a good man, but can we detach Negan 2.0 from the horrendous crimes of Negan Classic? It’s a question that different schools of philosophy would all give different answers to, which makes it an interesting story thread for The Walking Dead to keep grappling with over the course of season 9.

On the other hand, I’m still not entirely convinced about the threats posed by The Whisperers to Alexandria, Hilltop, and The Kingdom, all well defended settlements populated by experienced, combat ready survivors. Compared to the paramilitary might of the Saviours, this group of shuffling cultists are about as dangerous as a bag of feathers. I expect the much talked about “fair”, however, will feature some kind of Red Wedding-style bloodbath, so get ready to find out exactly how deadly Alpha and her cohort of wandering weirdos can really be.

Verdict: Guardians tactfully knits together its moving parts into a unified whole, making for some of season 9’s most watchable material thus far.