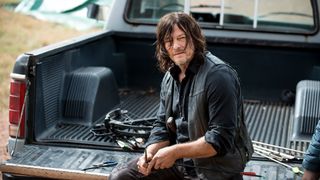 Episode 14 of The Walking Dead Season 8, Still Gotta Mean Something, may have aired on April Fool’s Day, but there was little room for tomfoolery in a noticeable darker outing for Rick, Morgan, Carol, and the rest of Atlanta’s survivors. In keeping with the season, however, we got our best (yet most confusing) look yet at the show’s longest running Easter egg, even if the details remain wrapped up in mystery for now.

In fact, I’m still left with more questions than answers about that scene with Negan and Jadis, in addition to a bunch of other head-scratchers relating to character motivations, plot holes, and every other kind of dangling thread you can expect from The Walking Dead at this point. Spoilers below, as I look at six of the biggest questions I had after watching Still Gotta Mean Something.

1. What was Jadis planning to do with Negan?

Despite dropping the monosyllabic cult leader act, there’s definitely still more to Jadis than meets the eye. First of all, her snazzy apartment/shipping crate makes me think she’s not the pure junk-loving naturist she pretends to be. Then there was the entire sequence with Negan, which needs looking at in detail. It eventually became clear that Jadis was planning to burn Lucille in a bonfire and use the flare to catch the attention of an overpassing chopper, but what was that mobile, skewered zombie all about?

Who skewered it, and why? Is it an art piece? A torture device? Was she just trying to scare Negan? Jadis did find an improvised use for it as cover from Negan’s gunfire, but I doubt that was what she originally intended for the device. Hopefully the character will be able to clarify what that was all about in a later episode, because I’m still totally clueless.

2. Who was flying the helicopter?

This is the big talking point from Jadis and Negan’s encounter. Upon setting alight (and then dousing) the flare, Negan was surprised to be met by the appearance of a helicopter, which hovered above the junkyard as though it was looking for someone (or something), before flying off again. We can confidently assume that Jadis was planning to use the flare to let the helicopter know of her location and get picked up (she had packed luggage and everything), but who was the pilot?

Did Jadis know them and, if not, then what were they looking for? Does the chopper belong to the same people that Hilltop met up with in episode 12? Has this Easter egg have been a tease for introducing The Commonwealth (a technologically advanced community from the comic books) the entire time? Hopefully we’ll know more by the season finale.

3. Has Rick gone too far this time?

Yes, his son may have just shot himself in the head after a fatal zombie wound, but Rick needs to have a long and hard think about how his ongoing behaviour is affecting his moral fortitude. After abandoning all hopes of peace negotiations with Negan in the mid-season premiere, Alexandria’s great leader literally stabbed a defecting Saviour in the back only seconds after they saved his life this episode, despite Alden previously pleading for him to spare their lives. Eagle-eyed viewers will also notice Rick is wearing his infamous murder jacket again, which is his preferred choice of clothing whenever things get morally dubious,  but the big question is whether the character can redeem himself from his descent into darkness.

It’s worth remembering that Rick has stooped this low before, biting and hacking people to death in desperate bids for survival, and the man’s come out of it with his moral compass intact, so there’s still hope yet. Plus, he committed this war crime with Morgan, who’s not exactly the best influence when it comes to making the right decisions. I mean, the guy literally held a man against a fence as he watched him get eaten alive by the undead. If Rick wants to get better, he needs to find some new friends.

In a surprising turn of events, Jadis let Negan go unharmed, but it remains to be seen whether she’ll come to regret this decision by the end of season 8. Negan offered her a new pact with the Saviours, which she declined, though he promised he’ll be back soon to ask her again, and I can’t imagine he’ll take no for an answer twice.

Will Jadis rejoin the Saviours once again, or continue to mope about the junkyard grieving the loss of her friends? Alternatively, it seems as though that helicopter might make a return trip at some point (Jadis kept looking at her watch, which makes me think it’s running on a defined schedule), so maybe the former cult leader still has the chance for an evacuation.

The Walking Dead episodes don’t just end without some sort of cliffhanger, and Gotta Mean Something was no different, as Negan encountered an unidentified person on his ride back to Sanctuary before giving them a lift home. Who was it? The most obvious answer would be Laura, who we haven’t seen since she discovered Dwight was a mole in the first half of season 8.

That would spell bad news for Dwight, but there’s also the chance that Negan’s mystery passenger is Gregory, who escaped Hilltop’s internment camp in episode 13. Some more outlandish theorists have even suggested it could be Carl, after faking his own death to hold secret peace talks with Negan, but that just sounds too ridiculous to be true… right?

6. Are Rosita and Daryl going to kill Eugene?

“We don’t take out the machines, we take out the man,” says Rosita to Daryl as a rather unnerving half-smirk forms across her face. Er, did she just suggest they kill Eugene? Sure, the guy has completely defected to the other side and is now actively working against Rick’s crew by crafting ammunition for the Saviours, but does her history with a former friend not mean anything to Rosita, who’s known Eugene longer than we have? Perhaps by “take out”, she just means ‘take hostage’ or ‘have a nice chat’, but given how temperamental Rosita has shown herself to be in the past, I’m not counting on it.

Hungry for more? Refresh your memory of season 8 with our Walking Dead recap of every episode so far, including last week's episode, or check out our full review for episode 14.