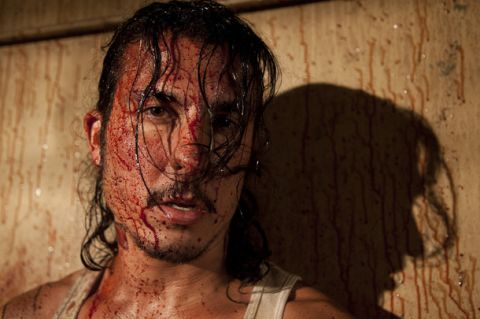 THE ONE WHERE Rick teams up with five prisoners to clear more of the prison… but ends up ruthlessly killing two of them.

VERDICT Well, we can sum this one up in five words: “Rick’s become a right bastard”.

For a while, “Sick” looks like it could be a disappointing episode – mainly when we’re sitting around the bedside of Hershel, waiting to see whether he’ll live or die. I’ve seen more than enough bedside blubbing in this show. I’d much rather have hung out with Carl during his trip to the infirmary, and seen the little fella offing a couple of zombies.

However, Rick’s ruthlessness gives the episode some real kick. It’s shocking enough when Rick plants a machete in psycho prisoner Tomas’s skull (despite the fact that the man is clearly a threat to all of the group). What’s really chilling is the cold-blooded way he chases down a second prisoner, Andrew, and leaves him locked in a yard full of zombies to be torn to pieces. This chilling illustration of how Rick has changed since killing Shane confirms that leaping forward a few months was a good move. Interestingly, once again, it seems he’s influenced by Lori, who absolves him of all his sins in advance of their commission.

After an opening episode that was almost non-stop carnage it’s good to see the balance shifting more in favour of intimate character moments. There are some really stunning performances this week, in particular Maggie’s speech to her unconscious father and the final exchange between Rick and Lori, which suggests that the ice between them may be beginning to thaw. In a lesser series, a moment like that would have turned into melodrama, but the supreme awkwardness of their interaction really has a ring of veracity.

NITPICKS There is a downside to leaping forward a few months. In the comic, it was just about plausible that the prisoners locked in the canteen might still be hoping for the arrival of a rescue party. But it seems downright absurd when they’ve been stuck in there for the best part of a year .

SPECULATION So are we all done with the two remaining prisoners now? Well, no – Lew Temple’s name appears in the opening credits, so at the very least we will be seeing Axel again. Who is the mysterious watcher in the woods spying on Carol and her undead friend with the shitty smalls? It’s got to be one of The Governor’s men, right?

IT’S A DOG’S LIFE A pretty busy episode by T-Dog standards: the forgotten man of the zombie apocalypse gets to kill one of those riot-armour-wearing zombies, and menacingly wave a gun around quite a bit.

UNEXPECTED (AND UNWELCOME) SIGHT OF THE WEEK Zombie knickers. Ew.

BEST LINE Daryl: “Today's your lucky day fellas: you've been pardoned by the state of Georgia, you're free to go.”