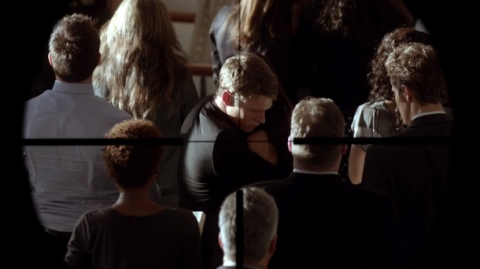 THE ONE WHERE A new vampire hunter comes to town and lays a trap for the bloodsuckers at the memorial for the council members killed in Pastor Young’s conflagration. Not good, especially when Elena is having strange cravings.

VERDICT After the slightly lethargic season premiere, “Memorial” is not just a return to form, but an awesome return to form, and possibly one of the ten best Vampire Diaries ever. It’s so good, that a) you barely notice Klaus isn’t in it until it’s nearly finished, and b) there’s a great scene involving Matt . No, honestly, we kid you not (though any hope that he’ll think, “My work here is done” and go off travelling sadly doesn’t seem likely).

“Memorial” fires on all cylinders, then pops down the local garage to buy a few more cylinders to fire as well. Elena’s plight, adjusting to her new “life” as a vampire, feels more believable and realistic than in the previous episode; for the first time in a long while, as she struggles with the temptation to feed on a human, you’re really rooting for this girl. Damon and Stefan’s arguments about how to treat her condition – let her feed on a human or rear her on bunnies? – also ring true. When Elena turns to Damon for help, hiding the fact that her body is rejecting any blood that’s not straight from a pumping human vein, Stefan’s sense of betrayal is poignant, and yet her reasons for going behind his back makes sense.

Connor is an interesting addition. As yet another vampire hunter he could have been quite a dull, identikit character, but his no-nonsense approach is refreshing. He shakes hand wearing a vervain-soaked glove and shoots anyone who shows a reaction without any hesitation. He’s a force to be reckoned with, clearly.

The episode also looks gorgeous, but director Rob Hardy’s skill isn’t purely visual. He gives the episode a an atmospheric sense of high tension, which goes into overload in the church memorial scene, which is an out and out classic Vampire Diaries set piece. From Connor’s apparently casual gutting of April to use her blood to lure out vampires, to Matt’s offer to let the deliriously ravenous Elena drink his blood so she won’t reveal herself to Connor, to Tyler’s decision to take a bullet (or stake) for the greater good, it’s a tour de force of clever writing, pitch perfect direction and solid performances.

Interwoven into the tension are lovely little character moments. Damon’s stumble when Elena feeds on him, as if he’s shocked by his own orgasmic reaction to such a personal moment is a simple but highly charged and curiously emotive moment (in the books vampires don’t have traditional sex, but exchanging blood is nearest equivalent, and that’s reflected here – almost literally: they do it in front of a mirror). Damon’s graveyard chat with Alaric’s ghost, moaning about how ’Ric has left him alone to babysit this bunch of kids, is equally powerful, especially as Damon doesn’t realise he’s there listening.

While emotions are running high for most of the episode there’s time for humour, and the episode has some classic Damonisms, including his retort to the sheriff, “If I was going to kill 12 people, I wouldn’t blow them up, I’d have a dinner party.” Caroline and Tyler’s bedroom scene is fun too, and it’s not often you can say that.

Only two things let it down. First there’s the over-sentimental oriental lantern memorial scene, which is pure TV emotion. In the real world, Bonnie would probably complain about the environmental damage caused by those lamps, and Jeremy would probably think the whole thing was slushy rubbish too. Damon’s right – you can’t mend grief with a bit a floaty crepe paper. In fact, it’s slightly curious how Stefan’s argument with Elena about her drinking Damon’s blood suddenly changes tack completely with Elena moaning about feeling like a well of grief. Stefan, mate – she’s changing the subject! Don’t give in that easily! The result is a scene straining to tug at the heartstrings but which never quite rings true.

Secondly, there’s April. If she’s intended as a recurring character then she should have had something more interesting to do in her debut than be a victim. Though we can’t help wondering if that drawing of a tree in her notebook is relevant, so far, she’s a bit of a nothing character.

Overall, though, a mighty fine episode and a great showcase for some of the show’s longest running central characters.

STARING MATCH OF THE WEEK They’re at it within the first five minutes, after a disagreement over Elena’s diet.

PEDANT Why does new vampire hunter Connor highlight these names with the edge of a letter? We reckons he’s one of those pedants who corrects people’s spelling on Twitter and the misspelling of Linda Jones was really irritating him.

IN-JOKE You have to love the moment when Damon enters the church, dips his hand in the font and crosses himself, saying, “I dunno why that always makes me smile,” referencing all the films in which the sign of the cross is lethal to vampires. Incidentally, believe it or not, although the show is now in its fourth season, this is the first time we’ve seen the inside of Mystic Falls’ church.

CONTINUITY This episode mark’s the first time Bonnie has invited Stefan into her house.

THE CREATORS Co-writer José Molina has never written for The Vampire Diaries before, but has worked on a whole bunch of US telefantasies, including Grimm , Terra Nova , Haven , Dark Angel and Firefly , for which he wrote “Trash” and “Ariel”.

TRIVIA This is the first episode of the series to not feature any of the originals since “Ghost World” (season three, episode seven).

• Read more of our reviews for The Vampire Diaries season four