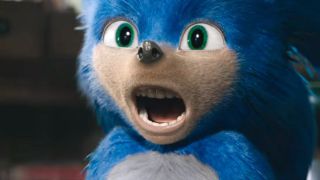 We were warned, and we didn't listen. The Sonic movie, which featured Gangsta's Paradise in its first trailer, now has its own rap theme. Check out the music video below (be warned, you cannot hold GamesRadar+ responsible for the headache you will likely get).

Titled 'Speed Me Up', the song features Wiz Khalifa, Ty Dolla $ign, Lil Yachty, and Sueco the Child (a Tik-Tok star who is 100% a full-grown adult). The music video starts with Wiz blowing on a Sega Genesis Sonic game cartridge, and yes it only gets more reductive from there. There are coin references, there are coin noises, there's Wiz definitely not playing the game.

But wait! Now he's in the game, running along Sonic and acting out some of the scenes from the movie. When Lil Yachty's verse comes up, he too gets to join in on the fun - the 8-bit rapper avatars are definitely the best part of this video, which flits back and forth between the rappers standing in a Sonic environment or reliving movie scenes that we haven't seen yet, but are playing on in-world screens so you'll get the reference.

If you're curious, I've collected the best lines from this future Grammy winner:

Wiz Khalifa:
Free my struggles, detach me from this island (Free)
Bleed my knuckles, attack me for my finance

Lil Yachty:
Ladies love my speed, quick to run up trees (Yeah)
Who you seen like me? Nobody (It's Boat)
Stayin' in my lane, best friend named Tails
Balance runnin' on whales, I can never fail

Is the chorus catchy? Sure. Does this song pale in comparison to Wiz Khalifa's Fast and Furious tie-in songs? Yes. And yes, there's really more than one Fast and Furious song (See You Again and We Own It). Looks like the rapper has really cornered the movie tie-in song market.

If you're on a classic games kick, check out what makes Super Mario games so magical.