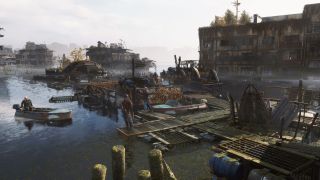 Almost precisely one year since the launch of Metro Exodus, its second major story expansion is now available. In Sam’s Story, players take control of a former United States marine as he struggles to return home. The series famous for its Soviet-style setting is at least teasing major changes to its world.

Naturally, it’s pretty rare for a post-apocalyptic story to show us much of the world, as what’s left standing usually doesn’t involve any simple transportation networks. The Last of Us took us across most of the continental US, and across its many iterations, The Walking Dead has long trekked through the American south, but usually we don’t get to span the globe once the world has ended, so it’s an intriguing premise for Metro to set up.

Sam worked under Colonel Miller in the Metro storyline and followed the series’ main protagonist above ground in Exodus. Once they discovered a bigger world still stood - sort of - he became determined to make it all the way home to the US. To get there, he first has to make it through tsunami-ravaged Vladivostok in a new chapter which developer 4A Games estimates will take players about five hours.

Sam’s Story is included in the Expansion Pass which also comes with the game’s first story DLC, The Two Colonels. 4A and Deep Silver have not yet revealed any more content for the game, which may imply Sam’s Story is the end of the road. If so, it begs the question whether Sam will make it home. Touching land in the US would be one hell of a teaser for the future of the series. Then again, if they do have more content up their sleeves, we’ll happily take that too.

If you’re struggling to survive the harsh conditions, use our guide on the best Metro gear and equipment.