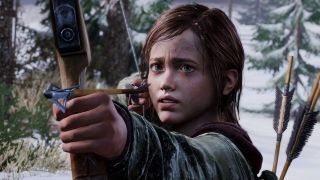 Ashley Johnson, the actress best known for playing Ellie in The Last of Us and its yet-to-be-released sequel, The Last of Us Part 2, has revealed that she took archery lessons for the upcoming PS4 game.

Speaking on an episode of Retro Replay with her Last of Us co-stars Troy Baker and Nolan North (starting from about the 7:35 mark below), the former commented on Johnson's impressive archery skills, and asked what had piqued her interest in the sport.

"I am good with the bow," acknowledges Johnson, explaining with some hesitation that the desire to learn "came from wanting to get at better at that skill for... I don't know if I can say this... for the second game."

The actor was quick to add that "there might not be an [archery] option in the game", seemingly emphasizing that her own approach to getting into character isn't any indication of how heavily the bow and arrow will feature in-game, though last year's demos have already shown Ellie wielding the weapon with formidable skill.

In other Last of Us 2 news, the game recently received its "M" for "Mature" rating from the ESRB, revealing it as the first Naughty Dog title to feature "sexual content", suggesting that the studio isn't shying away from the maturer undertones of its apocalypse-set sequel.