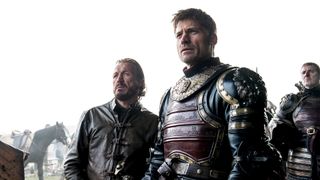 When all is said and done (and brutally murdered), who will be sitting on the Iron Throne once Game of Thrones has reached its conclusion? It’s something that has occupied water-cooler talk and online discussion for some time – but Nikolaj Coster-Waldau – better known as Kingslayer Jaime Lannister – has revealed that the ending is on the internet. So, get looking, I guess?

Speaking to Observer (via Winter is Coming), Coster-Waldau addressed the feverish Thrones theorists that plague every chat-room and forum from here to Westeros: “If you go online you can definitely read every plot point that’s going to happen,” before dropping the bombshell, probably half-jokingly, “You can find the ending of Game of Thrones on the internet. It’s there. But you wouldn’t know. Of course, nobody really wants to know.”

Do we want to know? I wouldn’t mind a quick glimpse at Thrones’ endgame. Here are a few theories to get you pulling your hair out before the end finally arrives in 2018:

Jon Snow kills Dany’s dragon(s) to save everyone

This one gets into convoluted book territory so I’ll keep it simple. To hold back the White Walkers, a mythical weapon known as Lightbringer must be re-forged to be held by the warrior known as Azor Ahai. Jon Snow will take up that mantle – one who is destined to kill his lover by forging the sword – and ends up slaying one of Dany’s dragons/combining it with Winterfell (a giant WTF moment, for sure). The theory is here in full on Reddit.

We all know this Bran/three-eyed Raven stuff has to lead somewhere so why not have his timey-wimey powers go back in time and save everything? Sure, it’s not the most original but it’s probably the best way to unify everything at this point.

This one has been doing the rounds for some time and maybe it’s a bit too optimistic to think everything will end with Sansa, Jon, and Dany creating some sort of holy trinity of rulers but, hey, stranger things have happened.

The child that saves the world

Back to Reddit for this one, and it’s also Lightbringer-related. The theory goes that Dany and Jon will get freaky (despite being related… come on, guys) and from there a child is born – one of Stark and Targaryean heritage and will bring peace to the Seven Kingdoms (who end up forming their own separate states). Oh, but Dany dies in childbirth and Jon dies stopping the White Walkers. Yay for death!

Everyone dies; the White Walkers win

Because it wouldn’t be Game of Thrones without a whole lot of death and destruction. Although it wouldn’t chime with George RR Martin’s promise of a bittersweet ending – unless you really like the White Walkers.

Like any of these theories? How do you want Thrones to finish? Let us know in the comments!

Game of Thrones season 7 debuts in the US on July 16, and in the UK on Sky Atlantic on July 17