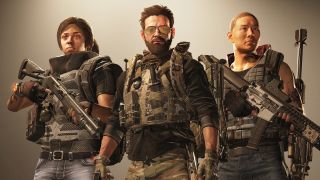 The next chapter in The Division 2 is Episode 1 - DC Outskirts: Expeditions, and as Ubisoft and Massive announced today, this free DLC will arrive on July 23 for Year 1 Pass owners and July 30 for all players. Aside from myriad fixes and balance changes, Episode 1 will introduce two new main missions, the Expeditions game mode, new gear including two Exotics, and two more Classified Assignments. The Operation Dark Hours raid is also getting a lowered "Discovery" difficulty (with reduced rewards), and even amongst the many balance changes, skill overhauls stand out.

The new missions are set in Camp White Oak and the Manning National Zoo, and star President Andrew Ellis and Outcast leader Emeline Shaw, respectively. Expeditions, meanwhile, will take players to Kenly College. Unlike missions, Expeditions will be split into three "wings," with new wings released on a weekly basis. "Completing all three wings grants access to an exclusive treasure room full of rewards," Massive said in a statement. The new Classified Assignments, meanwhile, are set in Washington's Central Aquarium and NSA Site B13, and are exclusive to the Year 1 Pass.

You'll likely find some of the DLC's new gear in that treasure room, including the Diamondback Exotic rifle and the Exotic BTSU Datagloves. Two non-Exotic weapons are also coming in Episode 1: the Stoner LMG and the Carbine 7. The Carbine 7 is a shooter staple and has been well-received on The Division 2 test servers, so its impact on the meta may well rival some Exotics.

On top of new weapons, agents will get to play with refreshed skills in Episode 1. Massive said "Skill power will be fine-tuned, adding more power to agents' builds," with game designer Bruce Kelly highlighting skill cooldowns as a point of focus in a recent livestream. Simply put, the hard cap on cooldowns has been lowered from ten seconds to three seconds, so if you really invest in cooldown reduction, you'll get to use skills much more frequently.

Finally, crafting is also getting an update in Episode 1. "Players can now craft their gear up until Gear Score 500 and share blueprints across characters (available after reaching World Tier 1)," Massive explained. "Additionally, crafted weapons can now be recalibrated." You can find tips for crafting and recalibration in our Division 2 crafting guide.

Ahead of the big DLC, here's everything in the latest Division 2 patch notes.