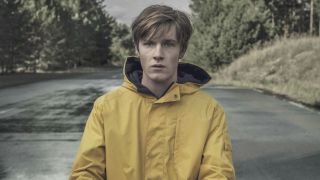 It’s July 2017 and SFX magazine (GR's sister publication) has just bumped into Daredevil at a posh hotel. A moment later, Iron Fist comes barrelling down the corridor. This isn’t Hell’s Kitchen, though. We’re at London’s Corinthia Hotel for a Netflix love-in, where the cast of The Defenders is doing press while rubbing shoulders with the hot new kids on the block.

Those new kids are Baran bo Odar and Jantje Friese, and they’re about to take the streaming service by storm with their ambitious new series, Dark. While Matt Murdock and Danny Rand head off to chat about their TV team-up, SFX is led into a cosy suite to meet Odar and Friese, the real-life married couple making history as the creators of Netflix’s first ever German-language series.

Disarmingly modest and friendly, they sip tea by a table of biscuits. Odar’s recovering from a stag do. They aren’t, you realise, people you’d associate with something as brooding as Dark.

“We’re both from small towns,” reveals Odar, rocking a Spielberg beard and baseball cap. “Usually in Germany, small towns are the nice places where everyone knows each other, but we always felt that there’s...

When I was a kid, our neighbour was a creepy guy and I remember my mum telling me all these creepy stories about him. But my question was, like, was he actually bad or was my mum bad, telling these stories? I felt like, ‘Oh, behind those doors, there are dark secrets.’”

The best shows on Netflix you should be binge watching

Secrets are at the heart of Dark. The 10-episode series, written by Friese and directed by Odar, takes place in the tiny fictional town of Winden. It’s November 2019 and 16-year-old Jonas (Louis Hofmann) is still reeling from his father’s suicide five months earlier. As he starts a new school year surrounded by whispers, there’s something even more troubling stoking the gossip embers – another teen has been missing for two weeks. And that’s just the beginning.

“The show centres around four families,” explains Friese. “So it’s not only one family saga, it’s four sagas intertwined. It’s about the teenagers, the parents and the grandparents. A boy goes missing from one of the families in a very mysterious way and while the crime plot kicks off in the first episode, you start to see that all those characters in the four families have some kind of dark shadows in the cellar.”

Adds Odar: “It’s based on a story we wanted to create for quite a time now, but it was actually more of a crime show in the beginning. When we read it again, we felt like something was missing, and as we did research on serial killers, we felt bored by the story. So we added another spice to it, which is that supernatural twist, and all of a sudden it was interesting for us and Netflix loved it, so they let us do it.”

Quite how the supernatural rears its head remains the show’s biggest mystery. SFX has seen the first two (gripping) episodes, and the paranormal undercurrents only begin to make waves toward the end of episode 2. While there are echoes of Stephen King, particularly in the small-town setting and the sprawling, interconnected cast, Dark doesn’t celebrate nostalgia in quite the same way as its network sibling Stranger Things.

“I would say we have more the David Lynch, David Fincher [vibe], if you want to refer to a filmmaker,” says Odar. “The Amblin, nostalgia thing, [where] everything was fine and nice back then, and sweet... we’re different.” Friese jumps in: “We’re the dark european brother.” Interrupts Odar: “mother!” Friese chuckles and adds: “The second cousin.” The theme’s catching as, triumphantly, Odar decides: “We’re the sick uncle who visits once a year.”

It’s clear why these two decided to make their personal relationship professional. They finish each others’ sentences throughout our chat and are equally passionate about their work.

They met at film school, have a daughter together, live in Berlin, and can’t agree over Dirty Dancing (she hates it, he loves it, though this may be a joke at Odar’s expense). “We’re interested in the same themes,” says Friese. “The darkness within us, and why do people become what they are? Why do they choose to turn into the dark passage? That gives us quite a good base to work together. Usually we agree on most things.”

If Dark isn’t quite the new Stranger Things, it’s certainly got an X-Files, Twin Peaks aura around it, not least in the way it tackles those mysterious supernatural ingredients. “We are more based on science, to be honest, than in Stranger Things, where it’s monsters,” says Odar.

“Our supernatural thing is more scientific and based on the Albert Einstein theory that time’s not linear but a circle.” Indeed, the series begins with an Einstein quote – “The distinction between past, present and future is only a stubbornly presented illusion” – and Dark’s demented narrative loops through three different time periods: 2019, 1986, and 1953. Time itself is both a mystery and a clue. Before Jonas’s father commits suicide, he writes a note and labels it: “DO NOT OPEN BEFORE NOVEMBER 4, 10:13pm.”

Elsewhere, the kids talk about Hansel & Gretel. The grown-ups worry about the closure of the local power plant. Everybody’s unnerved by the disappearances. Jonas’s friend says that her aunt once found a dead, five-legged squirrel near the nuclear plant. Later, a body is found wearing ’80s clothing, by a walkman that plays a creepy German pop song about the “time stream”. One character is reading A Journey Through Time by HG Tannhaus.

“There are sins and secrets and they all kind of come up to the surface,” explains Friese of this strange brew, “and those secrets don’t only have to do with the time now, but also the ’80s and the ’50s. We look at those characters through three different time periods and it works like a puzzle. With every episode there are new pieces revealed; the fates of all the characters are connected through a phenomena that bends time and space. That’s how far I can go at the moment!”

Still with us? Yeah, things are definitely weird in Dark, and the show’s a marvel of (yes) German engineering. Between them, Friese and Odar have crafted a clockwork-precision mystery that’s as complex as it is captivating. “In the end we had 72 characters, not including extras,” reveals Odar of their ambitious pitch to Netflix. “They had a lot of questions of course.

Then we had to create a bible; you don’t just run and do the show. We went away knowing Netflix liked the idea and the characters, and they read the bible and said, ‘This is all great, but what if this is even bigger at the end?’”

Clearly, ambition isn’t in short supply. The series shot over 150 days in and around Berlin, an undertaking that initially daunted Friese and Odar, who had previously worked together on films Who Am I and 2010 crime thriller The Silence. TV, naturally, is a very different beast.

“Beast is the right word!” laughs Friese. “No, obviously in terms of developing it [it’s very different], because we have to create 10 hours of content and TV shows work so differently from feature films in the way you treat the characters and work the arc.”

Get the most out of Netflix

8 Netflix tips, tricks, and hacks you should be using

Adds Odar: “Yeah, it was exhausting, but in a good way. I really love shooting. I love the set, I love talking to the crew and directing. It’s like a playground telling everyone from right to left or whatever. The only thing you don’t like is the cold winter. We were outside and we were literally freezing our asses off. That’s the worst thing about it. There was a moment where I felt, ‘I can’t do this any more, I can’t get up.’ But it’s a privilege. We’re both from film school so it’s our dream to make movies. We always appreciate getting to do it.”

So the show’s called Dark, but how dark are we talking here? “I think pretty dark!” laughs Odar. “We like dark stuff but we don’t think it’s dark.” Adds Friese: “I think it’s probably a question of perspective, what one considers to be dark. probably for us it’s not that dark.”

Odar gets in the last word again. “Just watching the episodes, we realised we’re also really emotional,” he says. “You see the grandfather as a father in the ’80s and as a kid in the ’50s, his perspective changes and his wishes. The show’s not as cold as just another sci-fi movie; it’s all about characters at the end. So we felt like it’s a very, dark family saga with this emotional sci-fi twist.”

This feature originally appeared in SFX magazine. For more sci-fi and fantasy news, reviews, and features, pick up a copy now or subscribe so you never miss an issue.