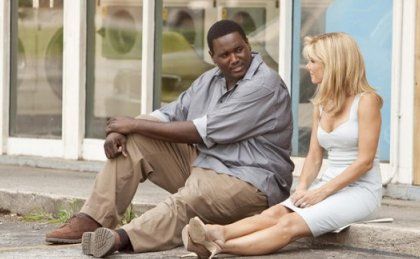 Combining two of the biggest audience-pleasing genres, the inspirational true story and the underdog sports yarn, The Blind Side has a great deal in common with director John Lee Hancock’s earlier baseball flick The Rookie.

Yet there’s something else at work in this tale of a homeless black teenager adopted by a kindly white family who enable him to realise his potential as a college and NFL football star.

For what that is, look no further than the Obama-popularised fist bumps that gentle giant Michael Oher (Quinton Aaron) shares with his little brother SJ (Jae Head). It’s a gesture indicative of the anything-is-possible subtext that underpins this schmaltzy fable, one in which a simple act of blind faith – be it in a black teen or indeed a black commander-in-chief – can reap untold rewards. There’s no wonder Hancock’s picture scored a touchdown at the US box office, generating enough coin to make it the eighth biggest earner of 2009.

Yet The Blind Side ticks one additional box by having its plot driven by an indomitable, feisty mother in the Erin Brockovich mould – one reason, perhaps, why Sandra Bullock is currently winning a bunch of Best Actress awards. The Speed star is certainly as good as she’s ever been as the steely Southern Christian who turns Michael’s life around (and it’s undoubtedly a step up from All About Steve).

Her work is hardly in the Meryl class though, compromised as it is by the film’s blanket refusal to contemplate if there was anything at all self-serving in Sean and Leigh Anne Tuohy giving Oher room and board (was it just a coincidence he went on to play for ‘Ole Miss’, his gridironcrazy patrons’ beloved alma mater?).

Hancock tugs at the heart strings and wrings the tear ducts with the same ruthless efficiency as a Superbowl playbook. More than once, though, you’ll ask yourself if this all really is too good to be true.