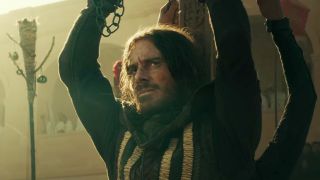 By now, you’ve seen the Rotten Tomatoes score, you’ve eyed the one star reviews, and you’ve flicked the Assassin’s Creed movie off your own private sync point. And that’s fine. You’re allowed to write if off completely. Everything is permitted, after all.

But then there’s the part of you that’s still interested; that wants to know if it can deliver what an Assassin’s Creed fan wants from a game movie. It’s the little part of you that’s spent the small matter of hundreds of hours in the Animus. The tiny part of your brain that suffers from its own personal Bleeding Effect when you look at real world architecture and knows where the feathers are. Sound familiar?

So could it be possible that the misguided film press is actually just taking out its personal frustration on the games industry with a swift air assassination instead of some constructive criticism? Possibly. If the review you’re reading puts the word ‘gamers’ in italics, you might want to add a star or two to the score.

But the movie. Is it any good? Well, yes actually, it is. Our largely positive Assassin’s Creed movie review isn’t wrong when it says it suffers from script issues, but this level of exposition was always going to clunk like a hidden blade in a washing machine, whether it fell out of Marion Cotillard’s mouth or not. Where the Assassin’s Creed movie excels is exactly where you’d expect it to; the past. This is a franchise that’s always taken great delight in throwing you into history. You’ve crept around the dusty rafters of Notre Dame, clambered up a sun-drenched St Mark’s Basilica and taken in the view from Big Ben’s Elizabeth Tower - I can see my house from here. Now it’s time to take a trip to the previously unexplored Spanish Inquisition where director Justin Kurzel actually gets to ignore the story we’ve all been ignoring for years and just get to down to the business of freerunning, stabbing and hunting for Apples of Eden. And guess what? It’s bloody exhilarating.

Fassbender’s tattooed Aguilar and his hooded companion Maria - an intense eye-linered Ariane Labed who I would happily watch a whole movie about or play a whole game with, Ubi - hurtle across rooftops in action sequences that put the majority of this year’s superheroics to shame. Breathless hand to hand combat, ridiculous uses of vertical surfaces, absurd jumps between clotheslines, and, of course, leaps of faith. It’s like having Assassin’s Creed injected into your eyes without holding R2 and sometimes getting stuck on a wall. Sure, they’re rather serious compared to some of our more recent Assassins and I could have done without the repeated eagle references which Kurzel layers on far too thick, but throw in his brother Jed’s pounding score and the adrenaline on offer is palpable.

It’s a shame then that there’s more of Fassbender’s very own Desmond, the incarcerated Callum Lynch, looking like everything hurts and having the whole plot explained to him. As navigating an alien race and genetic memory goes - don’t worry, she doesn’t go into Those Who Came Before - Marion Cotillard is more than up to the task and does what she can with the script, but the first half of the movie left me screaming to just be able to go back into the Animus. Where exactly is a ‘going into the past montage’ when you need it? Kurzel clearly delights in showing off dual Fassbenders flicking back and forth between the past and the future as the new improved claw Animus puts Cal through his ancestor's movements. I’d have happily seen twice as much.

While Aguilar creeps into the future in some blatant but enjoyable rewriting of the Bleeding Effect, the history from the improved Animus is tantalisingly out of reach. Rather than all the exposition, to be truly bold the Assassin’s Creed movie could have done all this without a bit of explanation. Critics would have eaten it up like an Assassin-flavour sandwich. Mmm, cheese and Apple of Eden. The questions would have been what drove it forward. Instead it’s paint by numbers in terms of plot but still confidently and stylishly directed enough to elevate it above the dross of this year. Want a disastrous narrative? Try Suicide Squad for size. Thankfully, the third act saves the day somewhat and ties everything in a nice (bloody) bow, upping the ante in both the future and back in the 15th century.

Those expecting series Easter eggs won’t really find any here and it’s almost refreshing. Assassin’s Creed stands on its own two gravity defying feet. While the game’s voodoo poisoner Baptiste from Liberation and Shao Jun from Chronicles China are in attendance (genetically at least), there’s no grand reveals for them. I think we catch a glimpse of Jun’s signature foot blade at one point but I can’t be sure. It’s enough to know that they’re there, rather than showy nods and winks to the fans. We’re grown ups. There’s hoods, jumps, and Templars played by Jeremy Irons and Charlotte Rampling. What more do you want?

So no, it’s not perfect but it doesn’t have to be. It’s bogged down by an obsession with exposition, but the historical sequences positively sizzle and Fassbender and co are never less than entertaining. Plus, it so blatantly lines up a sequel that it feels like it could be what the original Assassin’s Creed is to the (far superior) AC2. And that’s enough.