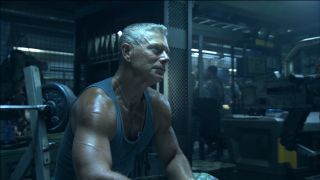 Ever since Deadpool himself announced that Cable was going to show up in Deadpool 2, there's been a few actors who have passively campaigned for the role. One name that's been bandied about is Avatar's Stephen Lang, and while doing some publicity for his upcoming horror film Don't Breathe he reiterated his desire to play the part:

"Oh sure, I was a fan of the first Deadpool and I’d be delighted to be a part of that sequel, but I haven’t spoken to anyone about it", Lang told Mashable. It kept cropping up on the internet that I should play Cable. The extent of what I did was, one day I was in the gym and I tweeted, "let’s lay some Cable", and that became construed as my campaign for the part. Even now, if someone does fan art, I’ll retweet it because I like keeping it alive".

"It’s the same studio as Avatar", Lang continued, "but I don’t know if that makes it easier or more difficult logistically. Either way, no one has approached me, and I can’t even say if I’m in the actual conversation. But they must be aware of it, because whoever makes those decisions must be aware of everything. Plus, I think I’d do a pretty bang-up job with the part. Having said that, understand that my obligation is to the largest, most successful film ever made, so Avatar takes precedence".

While I'm still hoping for a Keira Knightley to show up as Cable - seriously, even having the actress in costume for 10 seconds would make for a great follow-up gag to Deadpool's post-credit stinger - Lang would be a great choice for the role. It may just come down to logistics; Lang is already locked in for four Avatar sequels and it's unlikely that Fox would want Cable for just one film, so that may mean he's out of the running for the role. Either way, we'll be seeing plenty of Lang on screen in the next few years.

Directed by Tim Miller and starring Ryan Reynolds, Deadpool 2 is yet to be assigned a release date.