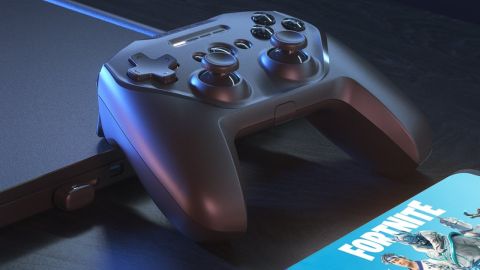 PC users should look elsewhere, but Android gamers will find a precise, robust, and reliable controller in the Stratus Duo.

I don’t envy anyone trying to break into the controller business. It’s a crowded market whose leaders are so established that knocking them off their perch would be impossible. SteelSeries made a beachhead some time ago thanks to the Stratus XL, but now they’re charging unto the breach once more with the Stratus Duo. Available for $59.99/£64.99 and compatible with Windows PC and Android, this is a handsome controller that’s the functional equivalent of a packhorse - it’s not showy, but it is effective and reliable. A focus on mobile sets it apart from the competition, too. But that’s where the Stratus Duo will live or die in your eyes; your opinion is going to vary greatly depending on what it’s used for.

Issues aside, there’s no denying that the Stratus Duo is an attractive controller. Decked in matte black that’s broken only by four spots of color near the face buttons, this is a subtler entry than prior SteelSeries handsets. It’s a little less ostentatious as well, eschewing the bright shades featured on previous entries. If anything, this is a doppelganger for the Xbox One controller; it has the same shape and chunky, sweeping shoulder buttons.

Where it stands apart is a player indicator bar with crisp white LEDs and concave thumbsticks. These are dainty and positioned at the bottom of the unit like DualShock 4, sitting pretty beneath the standard triumvirate of home, start, and select buttons.

The Stratus Duo’s main selling point is its compatibility with Android, VR (namely the Samsung Gear VR, Oculus Rift, and Oculus Go), and PC. It connects to these via Bluetooth or 2.4GHz wireless. Swapping between them is as easy as flipping a switch at the top of the handset, and such ease-of-use is underscored by a lack of dedicated software or drivers - like many modern gadgets, it’s a simple case of plug n’ play. When you’ve hooked up the Stratus Duo, you’ll get around 20 hours of use before needing to charge thanks to lithium-ion batteries.

So far as first impressions go, the Stratus Duo is like an alternate-universe Xbox One controller. It’s certainly from the same gene-pool, anyway; it’s got an equally comforting weight, a sturdy build, comfy and precise thumbsticks, triggers that are curved to the shape of your fingers and offers a decent amount of resistance, and a satisfying ‘clickiness’ to everything when pressed. In other words, you can tell within seconds that this is a quality product.

Unfortunately, that’s where the similarities end. For starters, the d-pad doesn’t fare well. While it would provide excellent finger roll for fighting game combos, it’s too bouncy and feels inaccurate as a result. The fact that it’s a singular unit also gives an unwelcome sense of drag when pressing left or right. That awkwardness carries over to the start and select buttons. Whenever I tried to press them, I found myself bumping into the thumbsticks - and I say this as someone with relatively small hands.

The bumpers are equally problematic. Because of their size, they’re uncomfortable to press properly. Indeed, I found it easier to press them them with the sides of my fingers instead. The only upside of that is travel time - there’s no need to lift your fingers from the triggers if you’d like to hurl a grenade, for instance.

As such, PC users won’t find much in the Stratus Duo to recommend over an Xbox One or Razer handset. It’s not quite as good as the former, and there aren’t any of the competitive features you’d find with the latter. For Android, though? Many of my complaints take a back seat. The issues are still there, yes, but there aren’t many cell phone controllers that balance quality with affordability in the same way (for example, Razer equivalents range from $80-$140).

In other words, the Stratus Duo comes into its own on Android because it isn’t such a saturated market. Excellent build-quality, ease-of-use, precision, and a lack of latency - things we take for granted on PC - are therefore easier to appreciate on mobile. We used the Stratus Duo extensively with Fortnite on a Samsung Galaxy S9, and it turned an unappealing control system into a console-like experience.

Thanks to the controller’s modest size and weight, it’s easy to cart around as well. You won’t have any problems connecting to your device, either - we were hooked up and playing in mere moments. Sure, the SteelSeries SmartGrip phone holder (sold separately) was a pain to attach, but that’s an inconvenience rather than a disaster in the grand scheme of things. Broadly speaking, the good outweighed the bad here.

Is the Stratus Duo worth your cash? For those wanting a PC controller, no. It’s a similar price to the Xbox One handset and is marginally worse, so there’s no reason to choose it over Microsoft’s offering. It’s a very different story for Android users, though. Implementing console-quality standards on mobile, it’s absolutely worth the asking price if you love playing cell phone games on the go.

PC users should look elsewhere, but Android gamers will find a precise, robust, and reliable controller in the Stratus Duo.