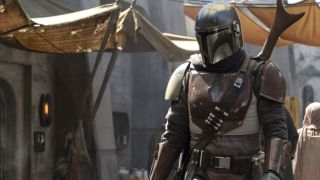 With so many Marvel shows coming to Disney's forthcoming streaming service, it's easy to forget that there's also a Star Wars series coming very, very soon. Star Wars: The Mandalorian reaches our galaxy November 12, 2019, and, excitingly, we know that showrunner Jon Favreau went to see Star Wars creator George Lucas to get advise on the series.

“We had a long talk with each other,” Favreau told GQ of meeting Lucas. “One thing he said to me was, ’remember, Jon, the real audience for all stories and all myths is the kids that are coming of age’, because he’s really a Joseph Campbell adherent.”

“We enjoy the stories as adults, but really, storytelling is about imparting the wisdom of the previous generations on to the children who are becoming adults, and giving them a context for how to behave and how to learn the lessons of the past without making the mistakes on their own. That’s the hope, that you can teach them how to avoid all the hardship but garner all the wisdom.”

No trailer for The Mandalorian has yet been officially released by Disney, though it was previewed at Star Wars: Celebration earlier this year. The series stars Pedro Pascal, who played Oberyn Martell in Game of Thrones, and is set in the mostly unexplored time period between Star Wars: Return of the Jedi and Star Wars: The Force Awakens, light years away from the influence of the New Republic and the First Order.

For more on Disney+, including price and what show's are coming to the service, read our Disney+ guide.