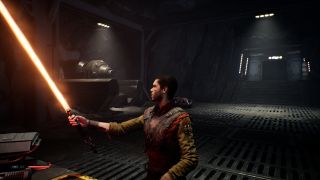 Star Wars Jedi: Fallen Order modders are making it easy to give Cal the makeover you may or may not feel he deserves. Over at Nexus Mods, you'll find a variety of mods that tweak Cal's appearance in both subtle and dramatic ways, as well as others that tweak performance and the general look of the game. The most popular of the whole bunch is called 'Better Call Cal,' which is designed to make Cal "less of a ginger."

'Better Call Cal' lets you choose from two complete overhauls for Cal: Greaser Cal and Hipster Cal. Greaser Cal features a fresh buzz-cut, while Hipster Cal has a longer, slicked-back hairdo. Either option adds a bit of scruff to Cal's face and darkens his hair and complexion, effectively ridding him of his ginger identity, for better or worse.

Then there's 'Mature Cal,' which gives Cal a questionable mustache and some lines for a more distinguished look. I love the way the 'stache curves upwards at the ends; I don't like the soul patch. You've also got the 'Dark Knight' mod, which gives Cal a black outfit with red accents, and the 'White Knight' mod that gives him a white and green outfit.

Needless to say, if you aren't happy with the way Cal looks in Star Wars Jedi: Fallen Order, you have no reason to suffer his stock appearance any longer.

Keep an eye out for big discounts of Star Wars Jedi: Fallen Order and other of 2019's biggest releases with our guide to the best Black Friday game deals.