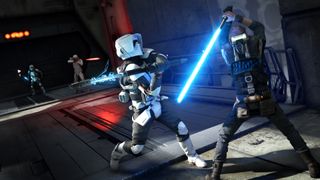 Star Wars Jedi: Fallen Order's been in development for years, so the way its combat looks a lot like "Sekiro with a lightsaber" must be mostly a coincidence, but it's still one that the developers at Respawn Entertainment find "comforting". GR+ sister outlet Edge Magazine spoke with several of the lead developers behind Fallen Order for an article in its latest issue, and though it covers much of the game's development, I was particularly impressed by the grateful way they handled the comparisons to From Software's latest game and other games that have come before.

“I thought it was pretty badass, and a little comforting to know that you could make this type of game without a stamina bar," lead combat designer Jason de Heras told Edge. "They let you attack, they let you roll, they do all this for free – and then the AI will tell you if you’re doing the correct thing. It just confirmed to us that you don’t have to limit everything the player does; let them have a little more agency, and then let the AI give them a slap on the wrist, or a punch in the face. It was a positive thing for us to know there was a game that was similar to ours. Very similar.”

Game director Stig Asmussen has also been a fan of From Software for years. He isn't even a Souls bandwagon jumper; King's Field 2 - which explored some of the concepts that From Software would follow up more than a decade later with the Souls games - is one of his favorite games. That said, Asmussen believes that it's not about liking a game and then trying to make it yourself, but thinking about what makes that particular game fun.

Respawn took a look at what made other Star Wars games fun, too. Fans of virtual lightsaber combat will be delighted to hear that the Jedi Knight games, especially Jedi Academy, were cited examples of the flavor of Star Wars action that Respawn was pursuing.

“Those games really sold the lethality of the lightsaber,” de Heras said “The controls were pretty straightforward, and enemies died pretty fast. We knew that, from a high level, we wanted to make it feel more like that, as opposed to something like Force Unleashed, which is more of a Force power fantasy, a game where you could take on hordes of enemies and lift giant ships. We were constrained by the kind of story we were trying to tell – this authentic, canon-based game. You wouldn’t see, in the movies right now, somebody lifting a Star Destroyer.”