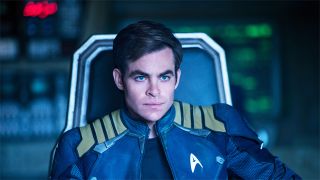 Star Trek Beyond only made its cinematic debut in July, but we'll be able to watch it at home as early as October. The first deleted scene from the well-received blockbuster has now arrived online (via USA Today), and it has Chris Pine's Captain Kirk feeling a little bit lonely.

One of the main plot points in Star Trek Beyond is that Kirk is thinking about leaving the Enterprise, and this conversation between the Captain and Simon Pegg's Scotty underlines the fact that Kirk feels a little out of place outside of his ship. It's a telling sequence, but Kirk's arc still has the desired impact despite this scene's absence from the final cut of the movie.

Deleted scenes won't be the only special feature on the Star Trek Beyond Blu-Ray; We can also expect a featurette detailing the work that went into the destruction of the USS Enterprise, tours through the film's vast sets, and a no doubt touching tribute to Anton Yelchin and Leonard Nimoy.

Deleted Scenes: Go Beyond the final cut of the movie with scenes you didn't see in theaters.

Beyond the Darkness: Meet visionary producer J.J. Abrams, director Justin Lin and co-writers Simon Pegg and Doug Jung as they discuss the inspiration for the Star Trek Beyond storyline and how it came to life.

Divided and Conquered: Learn how filmmakers pushed the boundaries in Star Trek Beyond by forcing the Enterprise crew into their most challenging situations yet.

Trekking in the Desert: Go on set to Dubai and discover how its futuristic architecture became the foundation for the most innovative Starbase yet.

To Live Long and Prosper: Journey through the past 50 years of Star Trek with J.J. Abrams and the cast as they reflect on the evolution of this iconic sci-fi series.

For Leonard and Anton: - Watch a touching tribute to the legendary Leonard Nimoy and beloved crew member Anton Yelchin.

Gag Reel: Join in on the fun with this hilarious gag reel of on-set bloopers.

Directed by Justin Lin and starring Idris Elba, Chris Pine, Simon Pegg, Zachary Quinto, Zoe Saldana, and Anton Yelchin, Star Trek Beyond will be available on Digital HD on October 4, 2016 before hitting DVD and Blu-Ray stands on November 1, 2016 in the US and November 21, 2016 in the UK.