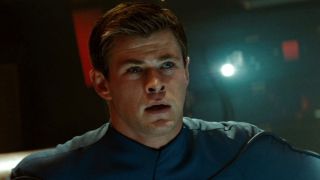 JJ Abrams recently teased plans for a fourth Star Trek movie in the alternate universe, leading most of us to expect a proper announcement if/when Star Trek Beyond makes all the money at the box office. Paramount and Bad Robot are clearly confident that they're onto a winner as it's now been officially confirmed: Star Trek 4 is happening.

But the big news? Chris Hemsworth is returning to the franchise after making a small cameo in 2009's Star Trek as Captain Kirk's father, George. He's a big get for the studio, especially as he was on the verge of superstardom on the first movie and now appears in blockbusters galore. Here's the first official description for the movie:

"In the next installment of Star Trek, Chris Pine’s Captain Kirk will cross paths with a man he never had a chance to meet but whose legacy has haunted him since the day he was born: his father."

If you hadn't gathered from that brief logline; Chris Pine is also reprising his role once more, with most of the main cast expected to do the same. There's no word as yet on who might direct the film, but interestingly enough, writers J.D. Payne and Patrick McKay are attached to write the script. The duo were initially contracted to pen Star Trek Beyond, before their drafts were rewritten by Simon Pegg and Doug Jung.

Typically studios won't greenlight future sequels until the opening weekend numbers are in for the newest film, so this a good sign. Although it's not entirely unexpected if you take a look at the early reactions for Beyond.