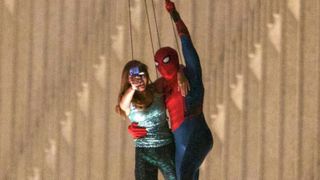 We've already seen a bunch of set pics from Spider-Man: Homecoming - which is currently a few months into filming in Atlanta - and they've teased everything from Spidey's new webshooters to new villains. The latest set of photos has the wallcrawler swinging from a helicopter with a mysterious redhead in tow - could it be Mary Jane?

There were multiple shots in Captain America: Civil War where you could tell that Spider-Man was CGI, but it looks like they'll be more of a focus on practical effects in Homecoming (not that a webslinging, wallcrawling superhero can be that practical). Here's hoping we won't be able to tell when practical effects end and CGI begins when the film debuts in cinemas next summer.