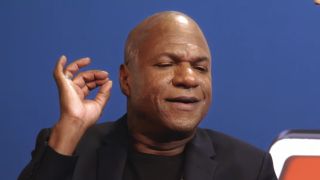 South Park: The Fractured But Whole is a game about kids pretending to be superheroes. They don't have actual powers, of course - it's all pretend. But if you've got real-world superhuman prowess, you could earn yourself an honorary spot in the game. Provided of course that your superpower is... farts.

"I Am The Fart" is a send-up of talent shows like American Idol, the <Insert Country>'s Got Talent shows, and The Voice. Only, instead of the world's best singer, or juggler, or ventriloquist, hosts Methane Man, Unknown Famous Girl, and T.J. Powell are searching for the best baked beans blaster.

The show is fake, but the contest is real, and running from October 2 to October 16. Only residents of France, Great Britain, Australia, Finland, Sweden, Norway, Denmark, Germany, Italy, Poland, Spain, or the Netherlands who are 18 years old at the time of entry are eligible. But if that matches you, simply submit a video of yourself farting to Ubisoft via the contest's entry page.

The winner will be announced on October 23. Note that this is after the release date of October 17, so it seems like you won't be able to smell your own farts (but like, in a good way) at launch. Also note that the contest is by popular vote - don't be afraid to dress up your submission so that it stands out. Do a handstand or the splits. Wear a costume. Just really go wild on that burrito tonight. Anything that helps.