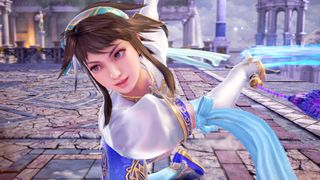 Most people I've asked seem to think Soul Calibur peaked with the second entry. Don't get me wrong: Bandai Namco's iconic series of 3D fighting games - where every combatant in the one-on-one duels wields a distinct weapon and can run in eight directions - has always been rock solid. But there was just something about Soul Calibur 2 that made it a mainstream hit which the series hasn't seemed to replicate since. Maybe it was the expansive single-player journey of Weapon Master mode, or the ingenious guest characters exclusive to each platform (Link on GameCube - my system of choice at the time - with Tekken's Heihachi on PS2 and Todd McFarlane's Spawn on Xbox). But I think the primary reason SC2 shines so brightly in our minds is the quickness and accessibility of its pick-up-and-play bouts. And after some extensive hands-on with the latest build of Soul Calibur 6, it already feels like the Project Soul development team has recaptured the magic of that timeless 2002 fighter.

All I wanted to do was sit there playing indefinitely, whether against the AI or a human opponent. Simply darting about the arena, experimenting with different attacks and reveling in lethal-looking throw animations, is a treat. That's something I haven't felt with the mainline Soul Calibur sequels of the past decade, despite buying them all. I'm ashamed to say that Soul Calibur 3 somehow never made it out of the shrink wrap, but I quickly grew weary of the Force-pulling, lightsaber-wielding Star Wars guest characters of Soul Calibur 4, and the costume-destroying Critical Finish mechanic didn't add much due to how rarely it was ever relevant. Soul Calibur 5 was enjoyable, but I couldn't shake the feeling that the fighting felt stiffer and heavier than the classics.

That vague sluggishness has been completely eradicated in Soul Calibur 6: movement is swift, attacks are speedy, and rounds can end in a flash once you've found your groove. The meter management introduced in SC5 is back, and you can still break away pieces of armor - but it's purely aesthetic, fuel for the fanservice that's long been a fixture of Japanese fighting games. I did manage to get a peek at Siegfried hiding underneath Nightmare's armor after my opponent bashed my helmet clean off my head. Speaking of aesthetics, the Unreal Engine 4-powered Soul Calibur 6 already looks fantastic, with vibrant colors, shiny particle effects, and smooth animations that all keep pace with the fast action.

Soul Calibur 6's roster is also a throwback to the good old days: Mitsurugi, Sophitia, Kilik, Nightmare, and Xianghua are back, and handle just like you remember. I was getting all nostalgic just seeing Nightmare bust out that drill-spin-style forward thrust, Kilik sweeping opponents into the air with a swing of his staff, and Xianghua juking attacks with her fancy footwork. The story of Soul Calibur 6 happens around the same time as the original Soul Calibur, so you can expect more of your old favorites to make their triumphant returns (rather than playing as their functionally identical offspring as in SC5). And while there will almost assuredly be a story campaign to fight through, you probably shouldn't hold your breath for something with the blockbuster presentation of a NetherRealm Studios story, or the sheer wealth of narrative to follow in an Arc System Works saga.

Only one new character has been revealed so far: Grøh, aka The Agent in Black, aka 'Don't ask me how to pronounce that ø'. I have to say, he felt a bit generic standing side by side with all these series standbys; I initially mistook him for Z.W.E.I., another poorly named, somewhat forgettable bad boy from SC5. Grøh takes after Darth Maul with his double-bladed sword, which he can split into two one-handed blades for quicker strikes, and though he doesn't feel all that unique from my limited experience, his attack animations look spiffy. His mildly unremarkable appearance gets a lot more interesting when he enters his powered-up state - something every character can do by spending one meter of your Critical Gauge (which currently maxes at two bars). Each character's transformed appearance probably has something to do with their Soul Sword affiliations; interestingly, Kilik's second form looks quite demonic, with wild hair reminiscent of Street Fighter 5's Necalli.

If there's anything that gives me pause about Soul Calibur 6 so far, it's the Reversal Edge, a new mechanic that momentarily slows down the duel for a quick exchange of rock-paper-scissors with the trifecta of horizontal attack, vertical attack, and kick. This quasi-cinematic clash is a nod to the success of Tekken 7's slow-mo moments, and it certainly looks cool - but it's not the easiest mechanic to explain or understand, and from what I can tell, there's almost no readability in-game (the color of your glowing aura during your chosen attack seems to be totally random). To complicate things further, you can also block, sidestep, or backdash during the animation if you opt for a defensive gambit.

Witnessing an unexpected slow-mo dodge or simultaneous punch in Tekken 7 always induces a spike in hype levels, as it can only trigger when both players are low on life and desperate for the final hit to close it out. But in Soul Calibur 6, the Reversal Edge can be performed at any time, indefinitely (at least in the build I was playing). If someone's spamming Reversal Edge, there are ways to punish it - but being able to pump the brakes of a bout for a quick guessing game over and over really hurts the pacing of what otherwise feels like a frenetic fight. I'd prefer to see the Reversal Edge function like Injustice 2's Clash mechanic, where each player only gets to activate this Hail Mary move once (which doubles as a bit of character building while the combatants exchange fightin' words). As it currently functions, the Reversal Edge just feels like a speed bump that beginning players will too readily abuse.

Reversal Edge gripes aside, I'm immensely excited for the day when I can pick up a copy of Soul Calibur 6 and just jam on casual matches with friends until our fingers ache. It's already got the spark of what the average fighting game fan craves: slick graphics, great presentation, and highly accessible duels that favor a rhythmic back-and-forth of offense and defense, without pinpoint combo execution and deep movelist knowledge as prerequisites. It doesn't have a definite release date just yet, but Soul Calibur 6 is set to debut sometime in 2018 on PS4, Xbox One, and PC.