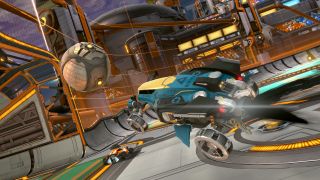 Bet you, like GR+, figured that after expanding from football to basketball and hockey, there wasn't anywhere else for Rocket League to go. Well, everyone figured wrong. Because it's now headed to… outer space.

No, this isn't April 1st. A new update to Rocket League across all formats called Starbase ARC introduces a space-themed premium DLC car, the Vulcan, and a new arena set up amongst the stars for you to play turbo carball in.

Developer Psyonix says it was inspired by its own mobile game, 2013's ARC squadron, and insists the new mode mixes “starship battles, floating planetoids and interstellar laser shows to create one of the most epic Rocket League galactic atmospheres yet".

Also added as part of the update is a Custom Training mode, where users can create exercises on specific maps and then share them with other players – how to dribble better, or pull off ridiculous saves, for instance. Whether the elite will be keen to share their secrets with other players is dubious, but it's a tidy idea.

Rocket League is out now on PS4, Xbox One and PC.