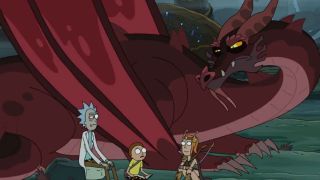 If you switched it off as soon as the credits rolled, or just want to find out who voiced the cat and dragon in this week’s episode, scroll on down below!

Rick and Morty season 4 post-credits explained: the cat and the dragon

With the bond between Rick, Morty, Summer, and Balthromaw the Dragon broken, the winged creature is forced to live on the streets. Continuing the through-line of dragons being "sluts" (don’t Google that), Balthromaw is accosted by a man who offers him $50 to perform various soul acts with him. Balthromaw swiftly refuses, burning the man’s car to a crisp in the process.

Then, the talking cat that accompanied Jerry throughout the episode enters the scene. His mysterious off-screen origins – which made both Rick and Jerry projectile vomit – are brought up again. It’s something that the cat says he’s “ashamed” of. The dragon offers to bond, but the cat reveals that he only wants the dragon to fly to Florida as the scene ends

So… yeah. The dragon is still as promiscuous with his purple aura as ever. No change there. We don’t get to see the MacGuffin of whatever the cat did in one of his previous nine lives, though we do once again find out that he’s extremely interested in Florida. Why Florida? We’ll probably never know.

Rick and Morty season 4: who voices the cat and the dragon?

Both the cat and the dragon have incredibly distinctive voices. The cat is guest star Matthew Broderick, best known for playing the title character in Ferris Bueller’s Day Off.

The dragon, meanwhile, is a fitting casting choice. Balthromaw is voiced by Liam Cunningham, AKA Ser Davos in Game of Thrones. Now, there’s a man who knows a dragon when he sees one.

From Pickle Rick to Total Rickall, here are the best Rick and Morty episodes, ranked!