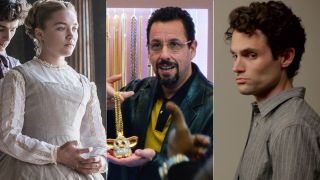 1. Get yourself some new, Victorian squad goals with Little Women

Before there was Star Wars or The Avengers, the story that had everyone busting their corsets was Louisa May Alcott's Little Women. Greta Gerwig's take on the classic novel - starring Saoirse Ronan, Emma Watson, Florence Pugh, and Meryl Streep - is the eighth movie adaptation and has critics falling in love all over again with the March sister. Gerwig's version focuses on the teenage lives of the complicated, warm and funny sisters, and throws in everyone's favorite floppy-haired snack Timothée Chalamet for good measure. It's the perfect excuse to escape your own family on Christmas Day.

What: Little Women
Where: Movie theaters
When: December 25

2. Head on back to Barry Island in the Gavin & Stacey Christmas Special

It's been almost a decade since Gavin, Stacey, Nessa, Bryn, Mick, Dave, Pam, Dawn, Gwen, Smithy, Doris, and the rest appeared on our screens for a brand new tale spread between Barry, Wales and Billericay, Essex. The show swiftly became a cult classic in the UK and even features James Corden in his prime, before he turned into the James Corden we all (don't) love today. Tune in on Christmas evening to experience an extra special hour-long episode of Gavin & Stacey, but here's hoping Smithy opts for a Christmas dinner over a chicken bhuna, lamb bhuna, prawn bhuna, mushroom rice, bag of chips, keema naan and nine poppadoms.

3. Adam Sandler is serious (and seriously good) in Uncut Gems

When comedic actors take on more quote-unquote ‘serious’ roles, it can go one of two ways. It can re-define their career in the way Steve Carrel stepped out of the shadow of Michael Scott in Foxcatcher, or it can go full Jim Carrey in The Number 23. Never go full Jim Carrey. Thankfully, Adam Sandler falls into the former category for Uncut Gems in what critics agree is one of his best-ever performances.

Sandler plays Howard, a jewelry store owner in debt and in serious need of some moolah. So, what do you do? You take a pawned ring, trade it with an NBA player, sell their Championship ring, and start placing bets on the NBA player’s game. Obviously. What follows is an edge-of-your-seat crime thriller as heavies and henchman race to catch up to Howard. Whisper it, it might just be the most underrated movie of the year. Plus, if you want to catch it again after watching it this week, it’ll be available on Netflix from New Year’s Eve.

What: Uncut Gems
Where: Movie theaters
When: December 25

4. Your problematic crush Joe Goldberg is back for You: Season 2

"You did it again, didn't you?" Joe Goldberg's ex-girlfriend Candace asks halfway through the trailer for You's second season. By "it" she could mean a litany of things: stalking, gaslighting, breaking and entering, robbery, assault, and a lot of murder. And by "again" she's referencing how Joe did all of this to her, at some point before the murdery events of season one (whether or not Candace is a hallucination is up in the air). The sexy serial killer has moved to California and has yet another woman in his sights: the unfortunately named Love, played by The Haunting of Hill House's Victoria Pedretti. If you like being simultaneously turned on and creeped out, consider You season two a late holiday present.

What: You Season 2
Where: Netflix
When: December 26

5. The Boxing Day and After Christmas Sales will be here before we know it

As true as night following day, and a nap following a big Christmas dinner, the Boxing Day and After Christmas sales will follow the big day - and it's getting ridiculously close already. If you missed out over Black Friday or just wanted to avoid the madness, then just after Christmas is another good opportunity to pick up some bargains on gaming tech. Expect some console accessories to come down in price as retailers look to capitalise on those that got them for Christmas: the best PS4 headsets will feature; along with some of the best Xbox One external hard drives; and with seemingly everyone buying Nintendo's console recently, the best Nintendo Switch accessories will definitely be worth keeping an eye on. You could also bring ion the new year with a visual bang and go for one of the best gaming TVs, as these are likely to come down in price - I got mine in a post-Christmas sale two years ago. Whatever you're after, it's a great time to try and peruse the usual players and see if you can pick up a bargain - gaming tech or not - and we'll be here to help you along the way.

What: Boxing Day and After Christmas Sales
Where: Everywhere! But GamesRadar+ will have you covered as we do some bargain hunting on all things gaming tech. Check back here on the 26th.
When: From December 26