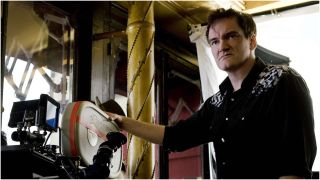 Quentin Tarantino has confirmed he will be stepping back from directing to focus on family life. The filmmaker has previously spoken about only wanting to direct 10 feature films – and has so far helmed nine.

Tarantino, whose most recent flick, Once Upon a Time in Hollywood, has been nominated for Best Picture at the Oscars, went on to discuss how directing is a "young man's game" and that he feels "a little bit part of the old guard".

He also discussed the chances of his much-discussed Star Trek movie being made, confirming that it's unlikely he would serve as the director. "I think they might make that movie, but I just don't think I'm going to direct it," he said. "It's a good idea. They should definitely do it and I'll be happy to come in and give them some notes on the first rough cut."

Star Trek actor Sir Patrick Stewart recently spoke about being open to appearing in Tarantino's potential movie, telling our sister publication SFX: "I would love to work with Tarantino. He’s a remarkable film-maker."

Although Tarantino may not be making a new movie anytime soon, there are still plenty of exciting movie release dates on the way.