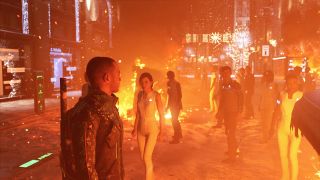 Quantic Dream founder David Cage says 2020 will be a big year for the studio, which most recently made Detroit: Become Human. Cage took to Twitter to tease "a lot of surprises" from Quantic Dreams in 2020.

The studio didn't release any new games in 2019, but they did port 2018's Detroit: Become Human over to PC. The PC port doesn't include anything new, but it does give PC players a way to experience what GamesRadars' Andy Hartup called "an interactive story capable of provoking genuine, honest, and varied emotions from its players, without most of the cheap tricks and emotionally manipulative moments we’ve seen in past games."

PC ports of Quantic Dream games also include the excellent Heavy Rain and the not-as-excellent Beyond: Two Souls. As we reported back in August, Cage says the process going forward will be to release all Quantic Dream games on every available platform at launch. That means that whatever we hear out of the studio in 2020 will likely be multi-platform from the get-go.

We don't have any indication that a new game is coming from David Cage and Quantic Dream, but it seems very likely we'll hear an announcement this year. With Detroit: Become Human now almost two years old, it's unlikely it'll get DLC.

Beyond a new game, some exciting possibilities include a sequel to Detroit: Become Human or even Heavy Rain, although that would be a first for the studio. Or, considering the studio's plan to go multi-platform, maybe we'll see those games get Switch or Xbox One ports.

I could speculate all day, but needless to say, it sounds like fans of narrative-driven games have an exciting year ahead.

If you're a fan of Heavy Rain, you might do well to check out the best mystery games for giving your brain a workout.