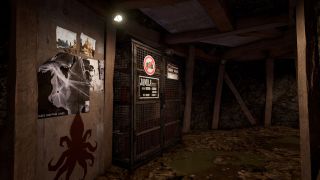 PlayerUnknown’s Battlegrounds, or PUBG, is no stranger to new maps but Karakin might be the most interesting addition yet – so we’ve put together our PUBG Kakarin map guide to help explain it. The smallest map found in PUBG by far, this 2 x 2km battlefield is even more compact than Sanhok which measures just 4 x 4km. If you were thinking this would make the game less enjoyable because of the sheer number of players, you’ll be pleased to know that the PUBG Karakin map is for 64-player skirmishes rather than the usual 100.

Most interestingly, the arid environment might evoke Miramar in terms of colour palette, but beneath the surface Karakin offers much more. That’s because subterranean tunnels run through the map, many offering top-tier loot – if you can find them. In fact, there are destructible walls and floors that open fresh routes if you use the new Sticky Bomb. You can’t miss them, really.

Speaking of destructibility, nowhere is safe in Karakin. A new hazard called the Black Zone will level buildings in an instant, so you’ll need to listen out for the telltale siren and check the map for the purple highlight. Without further ado, let's take a look at the best places to drop into for loot, and assess how risky each of them are.

For further details on each of the numbered areas on the PUBG Karakin map, take a look at our descriptions below.

It’s tough to say just how risky looting these small huts are, because they are dotted all over Karakin. In fact, you’re just as likely to end up with a match-winning weapon as you are to find absolutely nothing.

If you have a sticky bomb though, be on the lookout for destructible floors that can get you into the tunnels below. Not all Compounds have them, but the tunnels offer diverse loot.

Found at the south of Karakin, this is the smallest named location on the map. That often means a fairly low amount of footfall, although you might find more company if the initial flight goes anywhere near it at the start.

The residential buildings are all fairly small, meaning you can clear them quickly before moving to the next.

As we mentioned earlier, Compounds can lead into underground tunnels but there are other areas too – notably in the centre of the map. If you do need to blow open an entrance, be warned that it will draw attention to your position, perhaps more than with any other map because of the small size.

These claustrophobic tunnels are likely to be havens for those hunting for loot or trying to steer clear of enemies. There are even some underwater areas, but since you’ll be vulnerable while you’re swimming through them it might be easier to avoid these altogether.

This port town to the east of the map can be frantic when first landing but offers more tactical flexibility than you may at first appreciate.

For one, the numerous shipping containers can be just as handy as buildings for fresh weaponry and equipment, while the piers are handy for hiding if you aren’t lucky enough to grab a gun quickly.

A sizeable town that many use as a stepping stone to Al Habar, Bahr Sahir offers plenty of buildings to loot. With many of them having multiple entrances and exits, there’s a chance you could sneak in and sneak out with a full complement of weaponry without anyone seeing you.

There’s one large warehouse near the Water Tower which offers some prime loot, but it’s become a well-known early-game hotspot.

Laying to the west of the map is Bashara, an urban area with plenty of verticality. That’s both a blessing and a curse, as firing on an enemy from one rooftop could see you put right in the sights of another that’s even higher up.

Thankfully, there are enough alleyways and tight areas that you can lose pursuers if needed, but the map does get busy quickly – so you might need to dodge players until you can get your hand on a decent weapon.

Getting into the realm of the really tough landing spots, Cargo Ship doesn’t necessarily always offer the best loot but it will almost always offer a lot of it. This ship moored on the Southwest coast of Karakin is home to shipping containers aplenty, with more on land.

There’s a chance to be fully stocked within minutes of landing such is the sheer concentration of items and equipment, but that does tend to make it exceedingly popular. If you’re not the first to arm yourself, you might want to hide in the sea.

At the opposite end of the map is Al Habar, the largest urban area and most densely populated in terms of buildings and, most likely, opponents. Al Habar offers plenty of weapons and gear, but you’ll have to navigate increasingly tall buildings to find much of it which leads to some tense indoor encounters.

Add to that the possibility of sniper fire coming from anywhere when you’re on exposed rooftops, and you’ll have a lot to consider if you want to drop here.

Originally a well-kept secret, this location doesn’t specifically show up by name on the map but offers a series of factories to loot. Unfortunately, many players have caught on now, meaning if you make it to Jamila Textiles you’ll undoubtedly have a fight on your hands.

If you do survive a skirmish there, however, you’ll find yourself well-equipped – and overlooking some of the other popular areas like Al Habar.