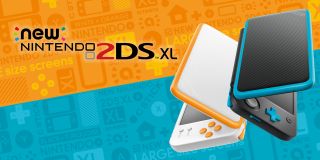 Has Nintendo's Metroid: Samus Returns announcement at E3 got you hankering for a handheld to play it on? Or has the idea of Pokemon Ultra Sun and Ultra Moon finally pushed you in the direction of Ninty's lovely portable offerings? Well rather than go all the way up to a 3DS, the upcoming  New Nintendo 2DS XL shifts the previously unfoldable device to a 3DS-style clamshell design and comes in two rather lovely colour schemes, black and turquoise and white and orange. Plus, cheaper.

Removing that pesky extra dimension doesn't just mean that the console is thinner and has a better battery life but also that it's a whole lot easier on your bank balance. The New 2DS comes with Amiibo compatibility too so there's a stack of reasons to upgrade. This all means that of course you can already snare your New Nintendo 2DS XL pre-order from a number of retailers to make sure you get your day one fix on July 28. Below are the best deals you can currently get on pre-orders and some select bundle deals already on offer with launch games Hey Pikmin!, Miitopia and Dr Kawashima's Devilish Brain Training.

Not sure if you want a Switch instead? Here are the best Nintendo Switch deals you can get right now.