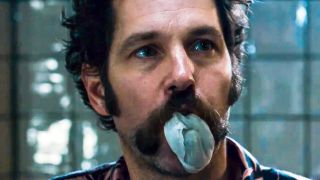 Netflix has been firing on all sci-fi cylinders as of late. First, Altered Carbon seemed to scratch a neon-dystopia itch we’d all been suffering with since the release of Blade Runner 2049, then The Cloverfield Paradox snuck up on us (although it was a bit disappointing), and, now, Mute is here to set tongues wagging. Directed by Moon’s Duncan Jones, it hits the streaming service today and is apparently set in the same universe as the cult sci-fi classic. But is it any good? The first critical responses are… not great, unfortunately. You can read them below, but if you’d rather just watch the movie yourself, I won’t judge you.

“Foremost among them is Leo Beller, your run-of-the-mill Amish bartender at Berlin’s premier robot strip club circa 2058. Portrayed with a carefully measured mix of glowering, breathing, blinking, and standing by Alexander Skårsgard, Leo has been rendered unable to speak by one of those throat-slashing Amish motorboating accidents that are always in the news. His pat quest to locate a missing girlfriend, in conjunction with Leo’s thin characterization and a minimal range of expression from Skårsgard, leads to one surpassingly boring performance.”

“From subtle production design choices to drones delivering fast food to robot strippers, it feels like a believably near-future world in which our characters are exploring their individual tales. Flying cars aside, you can easily believe this environment and these characters exist. Jones moves viewers through it all with a sharp eye, intriguing characters, and another solid score from Clint Mansell.”

How Mute reflects the ugly side of Netflix Originals - Variety

“Got an old screenplay in your bottom drawer that’s been rejected by practically everyone in town? Now’s your chance: Netflix seems to be greenlighting second-rate ‘content’ like cinema was going out of style (and if the company’s stream-at-home strategy succeeds, it just might). The latest beneficiary is Moon director Duncan Jones, who dusted off a 15-year-old idea, attached a few name actors, and delivered the latest disappointing Netflix Original with alliterative Mute an over-designed but otherwise uninspired slice of sci-fi noir”

“Somewhere in here is a reasonable film exists, but Mute is rather less than the sum of its parts. It owes a lot to the original Blade Runner, and as a consequence of its delayed birth now labours in the shadow of Blade Runner 2049. On Netflix alone, it comes in the same month as Altered Carbon, a series set further in the future but so similar in aesthetic that one suspects they shared sets.”

“After the humanistic, deeply moving Moon and the taut thrills of Jones' second film, Source Code, Mute comes as something of a surprise. Not just because of the grotesque proclivities of its characters, but also because its pacing feels so slack. Nevertheless, Jones is a talented director, and there are moments when the brilliance of Moon shines through: the opening shot has an eerie, dreamlike quality; his more intimate moments with Leo showcase his ability to impart a sense of character with lighting and cinematography rather than words.”

Looking for something else to watch this weekend? Check out the best movies on Netflix right now.